Mini opens the doors to its new Clubman

Compact but premium motoring marque Mini is stretching into a new automotive area with its latest model due to be officially unveiled this week in Frankfurt.
By : AFP
| Updated on: 15 Sep 2015, 01:25 PM 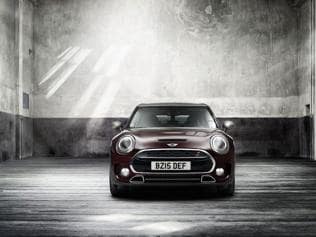 The new car is longer and wider than a standard five-door Mini. Photo:AFP

Compact but premium motoring marque Mini is stretching into a new automotive area with its latest model due to be officially unveiled this week in Frankfurt.

The old Clubman was based on a three-door Mini and used a controversial 'suicide door' on one side, but one side only, to improve access for rear passengers. It offered more interior space, but that room came with compromises.

Not so with the new Clubman. It's based on the new five-door Mini, so it has proper front and rear passenger doors, but boasts an extra 27cm of length and 9cm of width over the standard car. Those small numbers make a huge difference. The Clubman is bigger than an Audi A1 or Ford Fiesta and, thanks to a shooting-brake profile ending in split rear doors, it's also much more practical than either.

It offers 360 liters of luggage space with the rear seats in place and as each of those seats can be folded down individually, there are a host of solutions on offer for those struggling to transport everything from shopping to skis. With all three seats down that space jumps to a massive 1250 liters.

In fact, seats up or down, with an overall length of 4252mm the new Clubman is only 3mm shorter than a VW Golf and is actually 27mm wider (1817mm verses 1790) and crucially, will have a list of interior options, high-tech features and creature comforts to match.

For instance, the new model will be the first Mini to get an eight-speed steptronic gearbox and an electric parking brake -- perfect for stop-start congested city driving and for unexpected hill starts. The split rear doors will also get remote opening and closing while slightly more egocentric elements include projectors integrated into the wing mirrors that will shine a Mini logo-shaped light on the ground when the doors are open as a way of illuminating the ground at night.

As for engines, like all powerplants coming from BMW at the moment they're focused equally on performance as they are with efficiency and achieve this via prodigious use of turbocharging. Initial engines for the car will include a 192hp four-cylinder unit but with a combined cycle fuel efficiency of 45.6mpg (6.2l/100km) and an even more economical three-cylinder motor that offers 55.4mpg (5.1l/100km) yet still delivers 136hp.

The new car will be going on sale in Europe this October following its official Frankfurt debut on September 15 when other performance data such as acceleration and tops speeds will be confirmed.