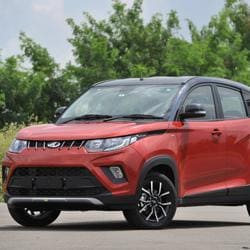 Both the bumpers in the new look KUV 100NXT have been redesigned and get contrasting silver skid plates that give the KUV a more rugged look.

Mahindra has given its first monocoque hatchback a significant makeover just 21 months after its launch and the result is the KUV100 NXT. This facelift gets premium features and styling tweaks which make the hatchback a lot more appealing than before.

While the silhouette hasn't changed, it gets several small changes that make a big difference. For starters, the headlamps are new, and while it retains the DRLs, the red detailing within the plastic covering has been given a miss. Then there's a redesigned front grille which looks quite aggressive, and it gets chrome inserts. Both the bumpers have been redesigned and get contrasting silver skid plates that give the KUV a more rugged look. In addition to increasing overall length by 25mm, these also enhance the car's approach and departure angle, which make it a bit more off-road ready. 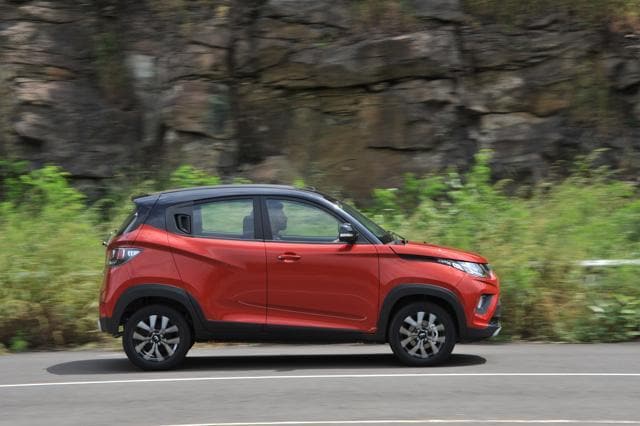 Further strengthening the KUV100's appeal are sporty 15-inch alloys which fill the wheel wells a lot better now, and new outside mirrors which get integrated turn indicators. The rear door handles are black now and don't stand out like before. New clear-lens tail-lamps, new character lines and a new spoiler give the rear a much nicer look. Like the Anniversary Edition of the KUV100 that was launched earlier this year, this car also gets a dual paint option - the red or silver shade with a contrasting black roof - alongside the six, other body colours. Overall, the KUV100 is more palatable to look at, and with this facelift, it leans more towards SUV than hatchback. But the oddball proportions remain and the confused mix of styling elements will not be to everyone's tastes. 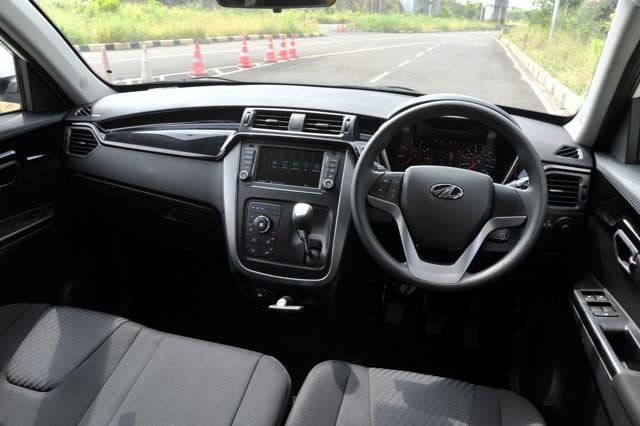 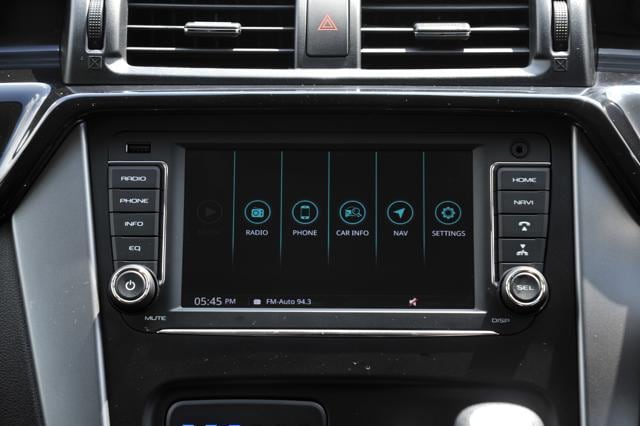 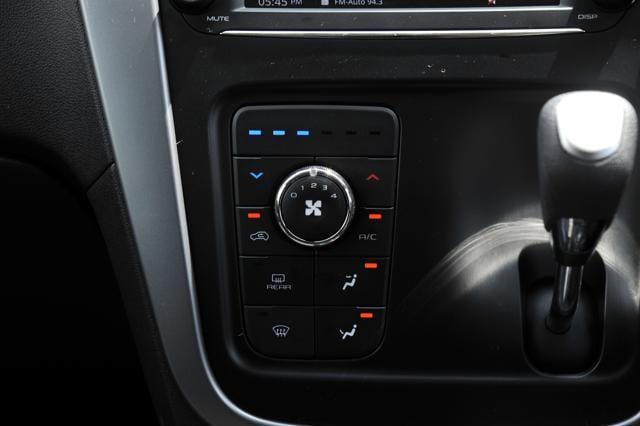 Just like the Anniversary Edition, this KUV100 NXT gets all-black interiors in the top-spec K8 variant, which enhances the cabin's appeal. The overall design is familiar, but the centre fascia is redesigned and the layout of the manual air-con buttons is new. The biggest difference here, however, is a 7.0-inch touchscreen borrowed from the TUV300. It gets navigation and is compatible with the Mahindra BlueSense app, but misses out on Android and Apple connectivity. The infotainment menu is very easy to operate, and the touch sensitivity and responsiveness are surprisingly nice. The screen also doubles as a display for the park assist, but the KUV100 misses out on a reversing camera. The other premium feature that this update gets is electric folding mirrors. 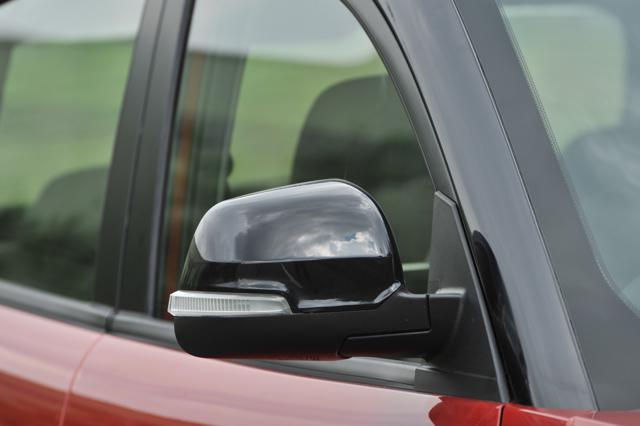 Possibly the most unique feature of the KUV100 is its six-seat configuration. But it's not very practical sitting three abreast in the front, unless the middle passenger is a child. There's not much place to speak of with the centre console cutting into knee room in the middle, and shoulder room too is a bit tight. The middle-seat backrest doubles as a comfortable front armrest and that's the best way to use it. The KUV100 is as practical as ever with several storage bins including a couple of hidden compartments. The rear-seat space and the 243-litre boot remain unchanged. 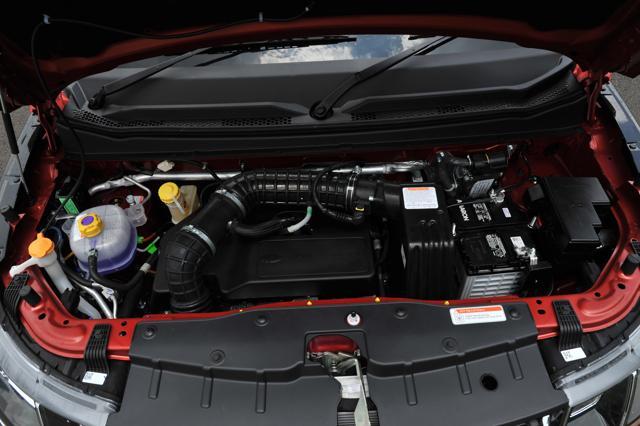 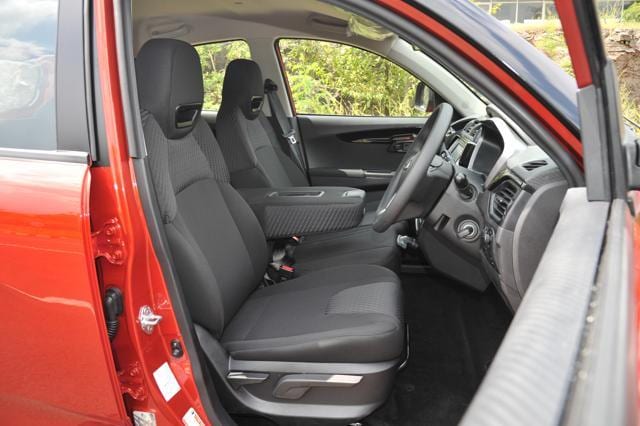 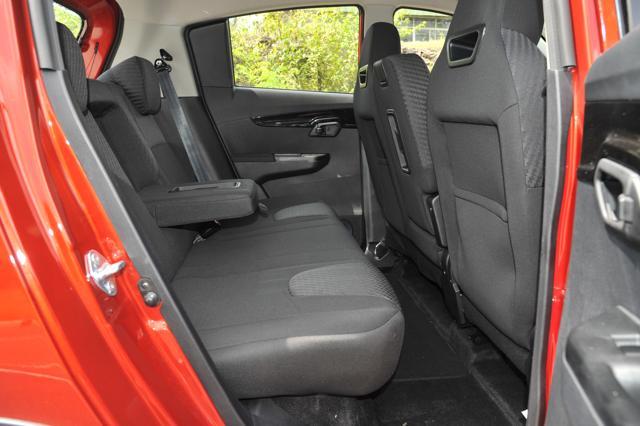 Engine options are the same as before, so there's the option of an 83hp, 1.2-litre petrol and a 78hp, 1.2-litre diesel engine, both mated to a five-speed manual transmission. We drove the diesel, which is smooth and with decent driveability. Like before, you can easily cruise around in a higher gear at lower revs and there's adequate pep to keep up with traffic without the need to constantly downshift. There's no spike in performance like in a typical turbo-diesel and the powerband is narrow, so by no means will it satisfy enthusiastic driving, even in Power mode. A special mention here goes to the superb five-speed gearbox that's been developed by Porsche engineering; it is slick, precise and a joy to operate. Mahindra claims to have improved the insulation and reduced vibrations. First impressions are positive and the sound from this engine isn't intrusive, and only when revved hard does the diesel drone become audible. Making more of a racket is the air-con blower which, even at low fan speeds, is loud. There's no perceivable difference to the way this car drives with the suspension being tuned to be the softer side. So, while it's comfortable over bad roads, on open roads there's a constant bobbing motion.

Overall, the KUV100 is a very practical and spacious car that's easy to drive. And the option of carrying six passengers is a huge draw for buyers looking for a budget family car. With this facelift, the KUV finally gets some premium features that other cars in this segment have been offering for a while now.