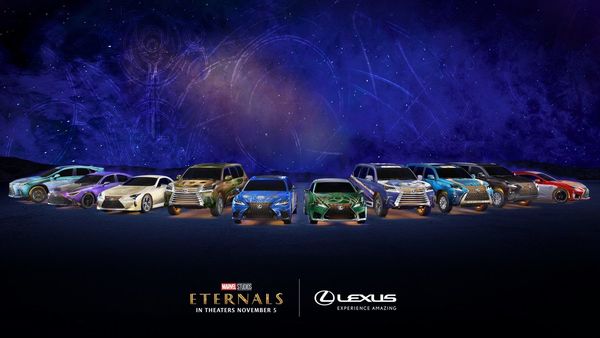 The 10 vehicles inspired by the 10 superheros from the movie Eternals.

Lexus and Marvel Studios have collaborated to design 10 character-based concept vehicles based on the latter's upcoming movie, Eternals. The design of these vehicles has been inspired by the 10 superheroes keeping in mind the individual armour design, iconography and superpower of each Eternal.

Lexus vice president of marketing Vinay Shahani said that these custom-wrapped Lexus vehicles have a distinct style and set of capabilities just like the superheroes in the movie. The automaker shared the details of the lineup. The Lexus GX inspired by Ajak played by Salma Hayek is powerful, commanding as the character. The superhero is paired with one of the most capable SUVs in the land, stated the company. Superhero Druig, played by Barry Keoghan, also gets a GX which reflects the rebel in his character. Gilgamesh, the strongest Eternal superhero character played by Don Lee, gets the biggest, most powerful Lexus SUV, the LX, shared the automaker.

Superhero Ikaris who is known as the tactical leader of the group, played by Richard Madden has become the source of inspiration for Lexus LS, the brand's flagship luxury sedan. Lexus IS has been paired with the superhero Kingo character played by Kumail Nanjiani. The fastest car in the Lexus lineup that is the RC F Track Edition finds its partner in the superhero Makkari, the fastest Eternal. The character has been played by Lauren Ridloff.

Superhero Phastos who is the tech guru of the team has inspired Lexus LX which too is in sync with character due to its advanced technologies. Lexus RC F has been paired with the superhero character Sersi that has been portrayed by Gemma Chan. Superhero Sprite who has the ability of illusion-casting has been paired with Lexus NX and superhero Thena, played by Angelina Jolie, gets to go with the sleek Lexus LC 500.

One might be disappointed as these vehicles will only feature in the events related to the movie and not in it.