Lexus NX300h review: Ticks all the right boxes to be a posh family luxury SUV

Lexus’ newest, most-stylish and most affordable crossover, NX300h, is different from other petrol and diesel-powered offerings on sale: It’s also a hybrid. But with a ₹60 lakh (ex-showroom) price tag, it is a big more expensive than the GLC, BMW X3 and Audi Q5.
By : Autocar
| Updated on: 09 Dec 2017, 02:23 PM 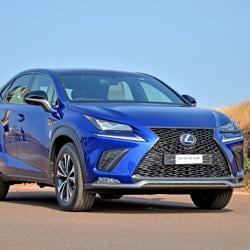 The NX300h looks unique and the exterior design is stunning from certain angles, although a bit disproportionate from others.

Seven months after the brand's entry into the country, Lexus has brought us its newest, most-stylish and most affordable crossover in the shape of the NX300h. Like the ES300h sedan and the RX450h crossover, the Lexus NX300h is also a hybrid and that will be one of its key USPs amidst other petrol and diesel-powered offerings on sale. In terms of dimensions, this car is a bit shorter and narrower than a Mercedes-Benz GLC. Also, with an expected launch price of around ₹60 lakh (ex-showroom) it's a bit more expensive than the GLC, BMW X3 and Audi Q5, and falls bang in Jaguar F-Pace territory, which has just had its price lowered thanks to local assembly.

The NX300h looks unique for sure and the exterior design is quite simply stunning from certain angles, although a bit disproportionate from some others. The 'Heat Blue Contrast Layering' body colour on our test car looked amazing with metallic flakes shimmering under bright sunlight. Even the paint quality is just outstanding. The oversized spindle-shaped front grill, sharp cuts and creases all along the exteriors and rather unconventional design cues really make it stand apart from the crowd. Being an F-Sport variant, the front grill is a bit different compared to the Luxury variant, and so are the bumpers and alloy wheels, however, both variants get 18-inch wheels, LED headlights and tail-lights with dynamic turn indicators, a roof spoiler and a large fixed panoramic glass roof. The unconventional design is carried over on the inside too. The black and white theme with contrast stitching looks great, but what's even better is the quality of materials on the inside and the fit-finish. There are some great bits likec. However, look hard enough and you will find some switchgear shared with Toyota cars and the key fob looks especially low-rent for a car of this price.

Lexus has fitted the F-Sport variant with a different set of front seats which feel very supportive, but miss out on the ventilation function that the Luxury variant gets both in the front and back. Even the rear seats of the F-Sport get a manual recline feature while the Luxury gets electric recline adjustment. And speaking of which, while there's ample leg and knee room in the back seat, under-thigh support is less because of the slightly low-set seats. Headroom, though is very limited. 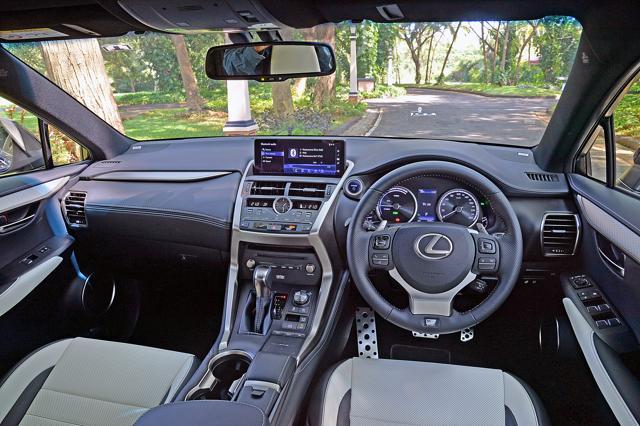 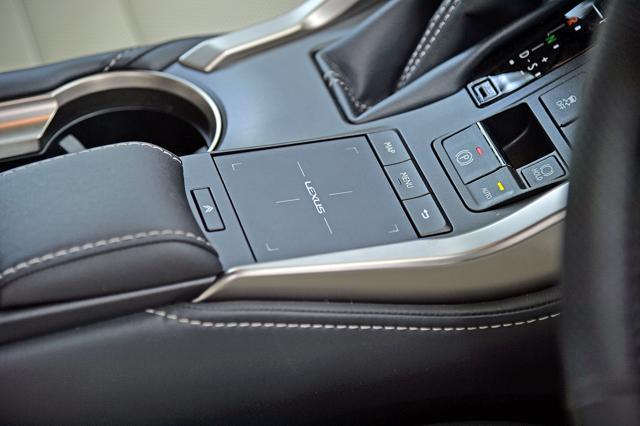 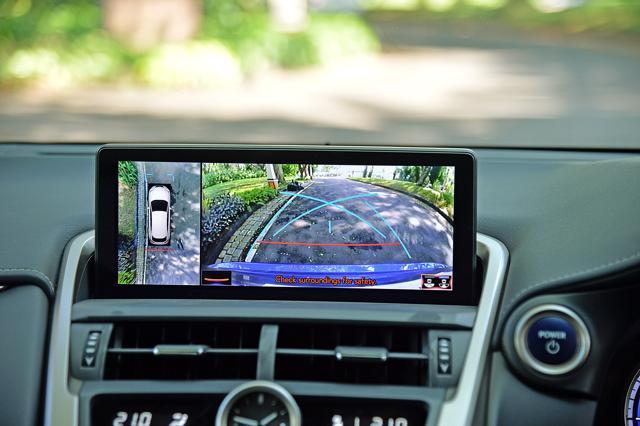 What's standard on the F-Sport are heated front seats and steering wheel, a 360-degree camera with front and rear parking sensors, electric steering adjustment, auto headlamps and wipers, wireless mobile charging, eight-way adjustable electric front seats with driver-side memory, a heads-up display, steering-mounted paddle shifters, an electric tailgate with the hands-free boot opening/closing function, and a long list of safety features too including eight airbags, vehicle stability control and an anti-theft system. It gets the same 10.3-inch infotainment screen like other Lexus cars in India. This system is quite straightforward to operate and to scroll through the various menus. Rather than the overly sensitive 'mouse'-like control interface, there's now a touchpad with haptic feedback, which takes a bit of getting used to, but is still an improvement. The good news here is that Lexus is now offering navigation as standard with its cars and owners of other Lexus models in India will soon be able to update their systems with navigation too. Also, what needs a special mention here is the 14-speaker Mark Levinson audio system, which sounds fantastic. 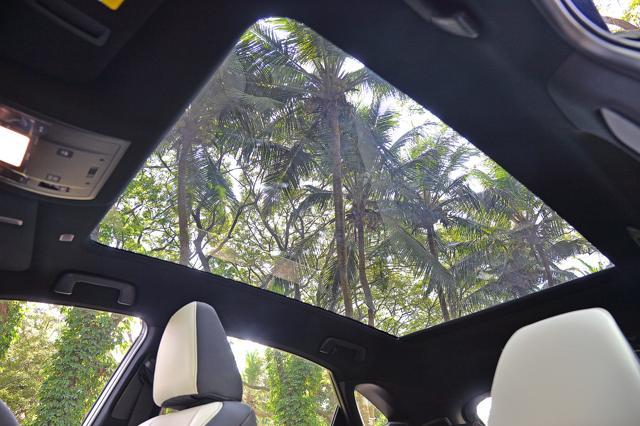 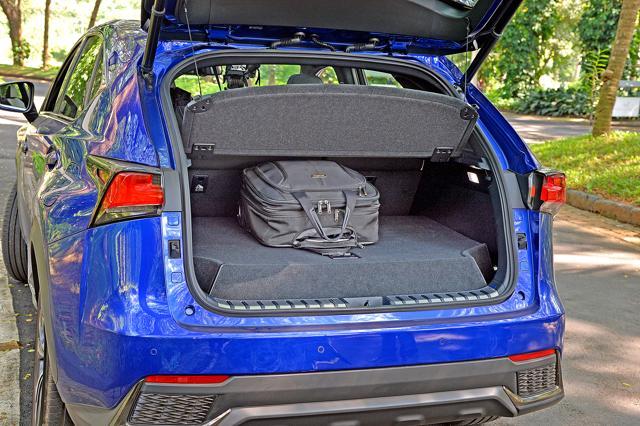 This one's a hybrid and like the Lexus ES300h and the Toyota Camry Hybrid sedan, it is powered by a 2.5-litre petrol motor churning out 197hp and 210Nm. This NX is all-wheel drive, so there's one electric motor powering the front wheels, one powering the rear wheels and one generator that works as an engine starter as well as recharges the battery packs. Because of all this tech and the heavy batteries, it is a pretty heavy car, tipping the weighing scale at nearly 1.9 tonnes, and that weight shows while on the move. The combined battery and petrol power results in excellent initial responsiveness to throttle inputs. The NX300h actually urges you to drive in a sedate manner and that's when you really begin to appreciate its relaxed and silent nature. In fact, the overall sound insulation is so good, passengers really feel secluded from the outside world. A cool party trick here is the inclusion of a sound generator, unique to the F-Sport variant, which plays a throaty engine sound track from the Mark Levinson sound system, to artificially make the car sound sporty. 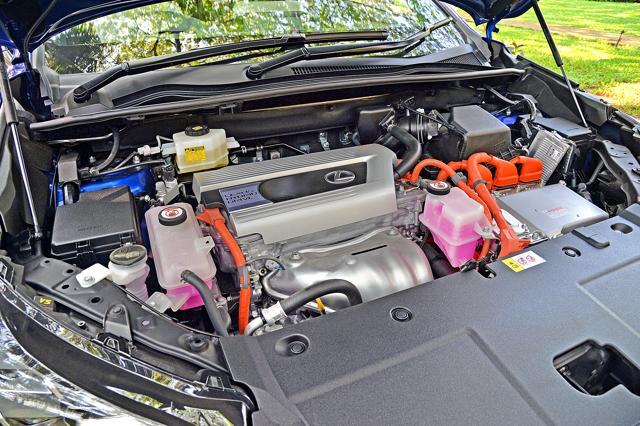 The NX300h comes with what Lexus calls 'adaptive variable suspension' that continuously adjusts damper stiffness based on the conditions. Still, the suspension is on the softer side (especially at the rear) and over wavy surfaces at highway speeds, there's some amount of vertical movement. This SUV has a nice and absorbent ride for the most part. The steering although light, is really sharp so it inspires confidence while driving in a spirited manner.

On first impressions, this NX300h might seem a bit pricey, but it looks very stylish and the unique design will let it stand out in a crowd. Then, there's the fact that the interiors are really high quality and superbly put together and it's extremely well-kitted too with a long list of equipment. It is also a very comfortable car to be in and the silent, vibration-free hybrid engine just makes the drive experience extremely smooth and relaxing. And since it's a hybrid, Lexus claim that it'll be very fuel efficient too with a claimed rating of 18.32km per litre. This SUV ticks all the right boxes to be a posh, 60-lakh-rupee family luxury car, primarily for the city and occasionally for the highway too.