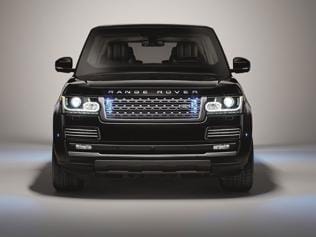 Launched with a guide price of €400,000 the Sentinel is based on the company's flagship Autobiography model and has been developed by its Special Operations department.

So as well as supreme comfort, a leather interior and rear seats that recline, it is also certified to VR8 standard against ballistic threats.

This ability to withstand a salvo of shells or other projectiles is due to a six-piece armored passenger cell, a tamper-proof exhaust system and self-sealing fuel tank, not to mention run flat tires and bullet-proof tinted glass all round.

'The Sentinel is one of the most extraordinary Range Rovers ever produced. It has been expertly engineered by Special Vehicle Operations to provide class-leading levels of protection to occupants against extreme attack, whilst retaining the Range Rover's luxury and refinement with off-road capability,' said John Edwards, Managing Director of Jaguar Land Rover Special Operations.