NANO GENX AMT The baby from the Tata Motors stable has got a long-due facelift. And automatic gears. Can it change the market mood?
By : Hindustan Times
| Updated on: 22 May 2015, 10:34 AM 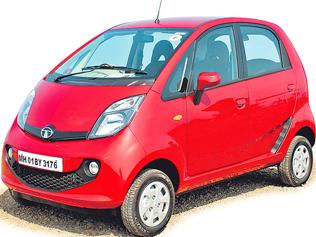 Launched in 2009, the Tata Nano has been begging for a facelift. The cheapest car in the world tag has been its bane, though Tata tried to undo some of the damage with the Twist two years ago, adding features like power steering and a proper music system. Is the GenX what the doctor ordered? 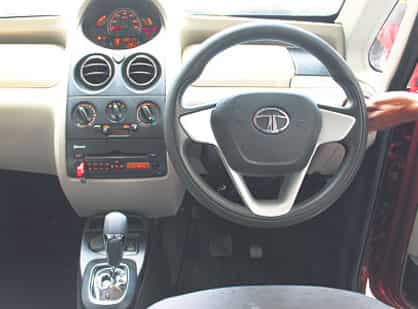 The console is nifty, and music system commendable

The biggest talking point of Nano Gen X was the openable boot. It is more spacious: 94 litres in the top-end Genx AMT and 110 litres in the conventional geared versions, from 80 litres in Nano Twist —enough for an overnight trolley and a backpack or two shopping bags. The rear seats can be folded to enlarge the space to a decent 500 litres.

Cosmetic changes include new smoked head lamps, redesigned grille and large circular fog lamps.The radiator has been moved up front to help balance the weight, and the fuel tank is now 24 litres.

The interiors are not much different from the Twist. Ground clearance goes up from 180 mm to 190 mm — at par with an Innova! The short bonnet enables a better view from the driver's seat. The company claims it has 4% better shoulder room and 6% better leg room than the Alto K10 AMT.

The air conditioning is the best in a small car below ₹ 4 lakh, and the music system includes 4 speakers and USB/ bluetooth connectivity. Yet, familiar flaws like the inconveniently placed power window switch and the lack of a proper bottle holder still remain.

With the automated manual transmission (AMT), though it is available only in the top-end variant, Nano GenX is surely the cheapest automatic car in the world, ahead of the Alto K10 AMT. It gets a 5-speed gearbox with sports drive that while not being as sophisticated as a proper automatic g ear, costs less and drives just like any automatic car. The "creep" function - put the car in forward or reverse gear, without stepping on the gas pedal, and the car moves ever so slowly - is a useful feature for city traffic situations.

The bummer is the puny twocylinder 624cc engine, which offers just 38PS of power and 51 NM torque. The car is sluggish, and power delivery is neither linear nor consistent. Seating four people and with the AC on, the car will be hard pressed to climb a flyover. With the high ground clearance and skinny 12-inch tyres, body roll is high too.

The car is quite efficient, and returned a best fuel economy figure of 19.5kpl in sedate city driving, and 17.9 kpl with the gas pedal floored on the highway. For a petrol automatic, that is good.

The GenX Nano AMT makes sense as a smart city car, given the rising demand for automatics. Though it is more refined and sure footed than before, it could have been a lot better. Tata needs to bring more to the table to succeed with the Nano: may be a bigger engine, to start with.