It is raining compact sports utility vehicles (SUVs) in India and if you are looking for one under Rs. 10 lakh, you will be spoilt for choices.
By : Hindustan Times
| Updated on: 01 Jul 2015, 11:09 AM 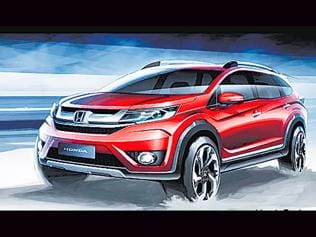 It is raining compact sports utility vehicles (SUVs) in India and if you are looking for one under ₹ 10 lakh, you will be spoilt for choices.

After Maruti and Hyundai, Japan's third-largest carmaker Honda has also thrown its hat in the ring and released sketches of BR-V, a compact crossover that will first debut in Indonesia before coming to India, likely by mid-2016. It is based on the platform of company's small-car Brio.

Its three-row seven-seater configuration is what differentiates BR-V from Hyundai Creta, Maruti S Cross and Renault Duster. Honda has confirmed a 1.5 litre petrol engine that powers the City and Mobilio for Indonesia but it is likely to also get the in-house 1.5 litre diesel engine in India.

BR-V's entry will coincide with Maruti's second offering in the segment—the sub 4-metre YBA - next year. With Mahindra, Tata and Toyota also expected to enter the fray in the next two years, competition will become intense. US-based analytics firm IHS has estimated that as many as 14 new vehicles may be launched in this segment in the next two years.

"We make cars for global markets that are tuned to the needs of a specific market. The craze for SUVs is there in many markets and we are aware of it," Katsushi Inoue, president, Honda Cars India had said earlier. "We may also need the third factory (Gujarat) to be ready before we launch any major product."

The company is propping up its R&D plant in Greater Noida to increase localisation and develop future models for India that has become its fourth-largest market worldwide.

Sources said, there maybe a five-seater version of the BR-V for India as the company may not want it to cannibalise Mobilio.