Ford has unveiled a one-off gamer-designed version of the Focus RS at the international 2015 Gamescom with a little bit of help from the Stig in a bid to promote its involvement in the upcoming \"Forza Motorsport 6\" game for the Xbox.
By : AFP
| Updated on: 07 Aug 2015, 02:11 PM 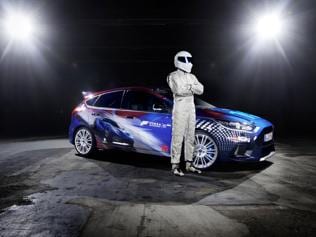 Ford has unveiled a one-off gamer-designed version of the Focus RS at the international 2015 Gamescom with a little bit of help from the Stig in a bid to promote its involvement in the upcoming 'Forza Motorsport 6' game for the Xbox.

The enigmatic star of BBC's 'Top Gear' drove the hottest hot hatchback in Ford's history to the event in Cologne, Germany where he refused to answer questions and stood around looking menacing.

What sets this Focus apart from the standard production model that will be going on sale towards the end of the year is that its exterior design was the work of 'Forza Horizon 2' players. The open-world racing game hosted a competition to design the car's livery and graphics, and the Focus that arrived in Cologne sported the winning entry.

As well as serving as the car's bodyguard the Stig was also present at the event to mark the fact that he will be appearing in 'Forza Motorsport 6' for the Microsoft Xbox One console, a game which is getting its European preview at Gamescom.

It is also a title that, no pun intended, has a heavy Ford focus. As well as featuring the new 345bhp four-wheel-drive Focus RS, the car company's equally new GT hypercar will be the game's cover star. It's a car that is going to be built in very limited numbers when production begins next year. In a recent interview with Autocar, the head of Ford UK, Andy Barratt, revealed that he was 'fighting hard' to get just 20 Ford GTs a year -- 7% of the vehicle's planned annual production -- allocated to British clients.

Such scarcity of supply could well mean that even for the most well-heeled of car fanatics, a console driving game will be the closest they ever get to owning a Ford GT. Still, with excellent visuals and one of the best driving simulation engines, the game could also be a good way for a potential Ford GT owner to take the car for a test drive before signing on the dotted line.

'In Forza Motorsport 6, racing and gaming enthusiasts all over the world will be the first to experience Ford's new ultra-high-performance supercar, the Ford GT,' said Dan Greenawalt, creative director at Turn 10 Studios.

As well as new cars, the sixth instalment of the game will be getting four new racing circuits -- Monza, Circuit of the Americas (COTA), Hockenheimring and the Sonoma Raceway. Fans of the franchise will know that the final two circuits in that list have featured in the series before, but Turn 10 Studios says that they have been totally rebuilt for the new game.