Ford Figo Aspire will replace the companys ageing Fiesta Classic sedan in the Indian market, which had seen sluggish sales due to a proliferation of compact sedans like Maruti Swift Dzire, Honda Amaze and Hyundai Xcent in the last three years.
By : Hindustan Times
| Updated on: 13 Aug 2015, 03:22 PM Figo Aspire is Ford's first major launch since its hugely successful compact crossover EcoSport almost two years ago. It will be the first model to be produced at the company's new factory in Sanand that has been built with an investment of $1bn and has a capacity of 240,000 units per annum and 300,000 engines per annum.

It will replace the company's ageing Fiesta Classic sedan in the Indian market, which had seen sluggish sales due to a proliferation of compact sedans like Maruti Swift Dzire, Honda Amaze and Hyundai Xcent in the last three years. Sub-four-metre sedans due to their shorter length get excise duty benefits and are priced significantly less than full sized bigger sedans.

'There are many high end features that we are offering with the Figo aspire like six airbags and leather seats that are not on offer in this category,' said Nigel Harris, president and managing director, Ford India. 'It will also be exported out of here world over and Sanand will be a world class export hub. This is not a compromised car.'

Figo Aspire is powered by a 1.2 litre petrol engine that belts out 88 PS power and 112 NM of torque and has a rated fuel economy of 18.2 kpl. The 1.5 litre diesel engine gives 100 PS power and 215 NM of torque with a fuel economy of 25.83 kpl. For a first, Ford is offering dual airbags as a standard feature in the Figo Aspire. The top end variant of the car is also equipped with six airbags - a first in this segment.

The company will follow up the sedan with a hatchback version in the next few months that will replace the existing Figo small car. Compact cars is the largest segment in the Indian market accounting for 45% of overall sales or almost 1.1 million cars per annum. The segment is expected to grow to around 1.8 million cars per annum by 2018. Globally small cars are expected to account for 60% of overall sales in the near future.

In India, around 350,000 units of compact sedans are sold every year with Maruti Dzire the dominant leader with around 200,000 unit sales annually. 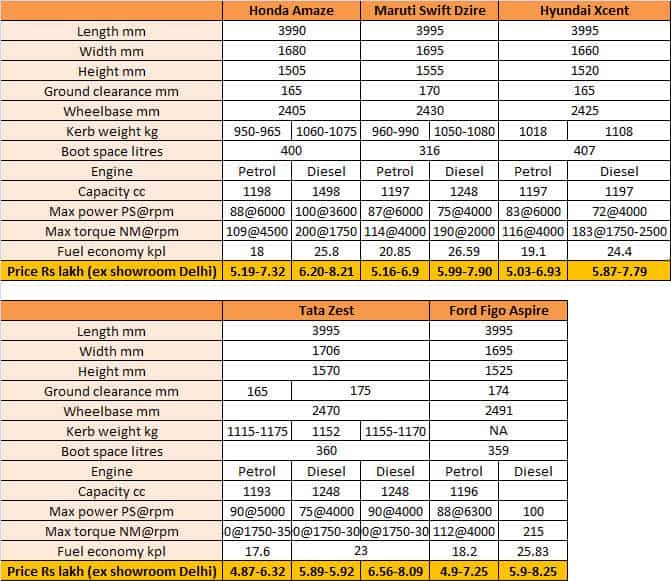