Farmers give Mahindra (and maybe Narendra Modi) a sliver of hope

Mahindra’s farm equipment sales, including its tractors, have recorded better numbers in recent days, and could be an encouraging sign for Prime Minister Narendra Modi as he prises the economy open again.
By : Bloomberg
| Updated on: 23 Sep 2020, 07:40 AM 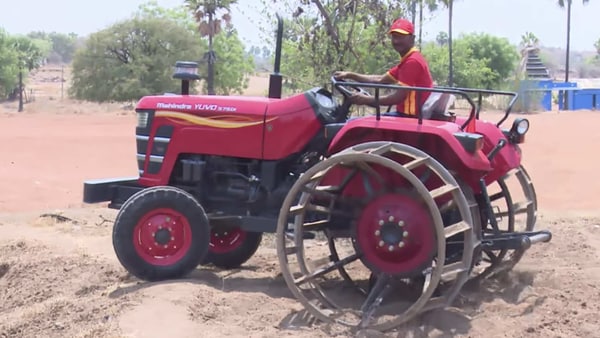 A Mahindra Yuvo tractor in action

Indian conglomerate Mahindra Group said sales of farm equipment are much better than expected as the country’s vast hinterland bounces back from lockdown, despite the coronavirus running rampant.

Tractor sales jumped 69% in August from a year earlier, Mahindra’s head of finance, Anish Shah, said in an interview with Bloomberg Television. India’s farm equipment sales have been improving since a barren April, when all sorts of manufacturers across the country were forced to halt production and the top carmakers didn’t report any vehicle sales.

“Things have come back actually very well -- much better than what we expected," said Shah, who is set to become the conglomerate’s chief executive officer next year.

India is reporting tens of thousands of new Covid-19 infections a day and cases now total about 5.5 million, making it one of the hardest hit places in the world. That’s having a major impact on South Asia’s biggest economy, which Goldman Sachs Group Inc. expects to contract by almost 15% this year. Others have similarly bleak forecasts as the pandemic restricts business activity and consumption. Gross domestic product plunged a record 23.9% in April-June.

Mahindra’s farm equipment sales at least point to some sign of life in rural India, where 70% of the population live, and could be an encouraging sign for Prime Minister Narendra Modi as he prises the economy open again. Agriculture is a critical industry and was largely exempt from the nationwide lockdown, while decent rainfall this year has also helped farmers and their crops.

The outlook for the automobile business isn’t too bright, though. Mahindra is in talks with an investor to sell a stake in Ssangyong Motor Co, as the group reevaluates how it allocates money, Shah said. Mahindra owns about 75% of the South Korean car company.

HAAH Automotive has likely submitted a plan to acquire a substantial interest in Ssangyong for $258 million, the Economic Times reported last week, citing a person familiar with the matter. Shah didn’t identify the potential investor.

India was already going through its worst-ever slump in auto sales before the pandemic. While many companies, including Mahindra, reported improvements in recent months, the growth was from a weak base last year, when half a million workers lost jobs in the industry.

“It will take about three to six months to get anywhere close to normal, and getting back to normal may actually take even longer than that," Shah said, adding that smaller companies are more at risk across sectors.