The company has been highlighting the revolutionary petrol technologies it has introduced in the EcoSport, but it is still the diesel that is bound to rule. And the new car from Ford is the one to beat -- for now. Sumant Banerji reports.
By : Hindustan Times
| Updated on: 09 Jul 2013, 12:02 PM

The company has been highlighting the revolutionary petrol technologies it has introduced in the EcoSport, but it is still the diesel that is bound to rule. And the new car from Ford is the one to beat -- for now.

The wait for the Ford EcoSport, arguably the most exciting product to hit the roads this year, has been long. But as the starting price of ₹ 5.59 lakh suggests, it has been worth the wait.

The demand for cars is far from its peak, and while many would say this may be the most inopportune time to launch a product, some would argue that there cannot be a better time.

For people biding their time and postponing their purchases, a new product often brings with it the lure of novelty. And the EcoSport is novel, without doubt.

The company has been highlighting the revolutionary petrol technologies it has introduced in the EcoSport, but it is still the diesel that is bound to rule. And what does the EcoSport have to offer here?

Design and functionality: smartest of the lot?
When we tested the car, the EcoSport had still not been launched. From the numerous stares that it evoked, across the board, its head-turning qualities were clear.

That will not change much even when the car becomes common on the road. Intrinsically an urban crossover built on the global Ford Fiesta platform, the EcoSport has a butch stance thanks to its high 200mm ground clearance and an overbearing trapezoidal grille. 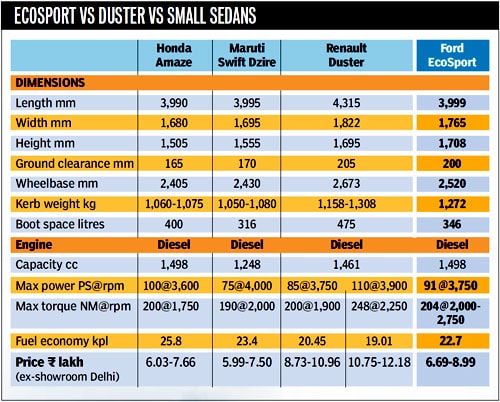 The narrow wraparound headlamps a la Volkswagen, and the flared wheel arches, make it stand out. The spare wheel mounted on the rear door give it a sporty look. There are some neat touches as well, such as the quirky door handle that has been integrated into the tail lamp cluster.

The inside view is identical to the new Ford Fiesta. The dashboard and the instrument panel are a straight lift. The cabin is neatly laid out and gives the driver easy access to the buttons and knobs.

But the high point has to be the seats, both front and rear. Hard, but not uncomfortable, they hold you in place in bucket-seat fashion, so that the body roll is nearly negated.

Unlike the Duster, this is a sub-4 metre vehicle, so the rear space is on the low side, though still adequate.

What is not, are the fit and finish of various panels and the relatively small boot. Ford does offer 60:40 split rear seats, though, and that should address some of the luggage space issues.

Powertrain
The similarity with the Fiesta carries on to what is beneath the bonnet, too. The EcoSport is powered by the same 1.5-litre turbocharged diesel motor that develops 91 PS of power and 204 Nm of torque.

Unlike the petrol variants — and the competing Renault Duster — only one diesel engine variant does duty here.

In terms of outright power, it compared well with the Duster's mileage-oriented variant that produces 85 PS, but falls short of the performance-oriented top-end variant.

Where it scores are on refinement and driveability. Engine noise insulation is spot on, the steering is responsive and the clutch pedal light — unlike the Duster.

There is also negligible turbo lag and the car gets off the block quickly, revving happily till about 140 kph, beyond which it gets a little fidgety.

Verdict
There are a lot of merits in the EcoSport, but the one that everybody is talking about right now is the price.

At ₹ 6.7-9 lakh spread out between the four diesel variants, this car offers irresistible value for money. A good ₹ 2 lakh cheaper than the Duster, while offering a lot more features, refinement and a fresh design, Ford sure has set the cat among the pigeons.

It does lack a little on power and rear space, and despite its high ground clearance, cannot be the choice for off-roading. But clearly it has set the benchmark for compact SUVs in India. Over to Maruti, Hyundai.