That the commuter-class segment is the bread-and-butter of Indian motorcycle manufacturers is no great secret. Purely riding on this category, Hero MotoCorp has climbed to the top of the global list of bike makers, by volume. Hari Warrier reports.
By : Hindustan Times
| Updated on: 13 Aug 2013, 10:30 AM

That the commuter-class segment is the bread-and-butter of Indian motorcycle manufacturers is no great secret. Purely riding on this category, Hero MotoCorp has climbed to the top of the global list of bike makers, by volume. Its erstwhile partner, Honda meanwhile, has been making serious efforts in the commuter segment.


Last year, it launched the rather peculiarly named Dream Yuga, a 110-cc bike aimed at the younger commuter. The bike was a runaway success, and Honda has launched its next 'Dream' product, the Dream Neo.

This bike is essentially built upon the Yuga, but has been tweaked in essentials to appeal to, as the company puts it, a more mature class of commuter, in the 30-40 age group. To this end, the bike has muted graphics compared to the Yuga. 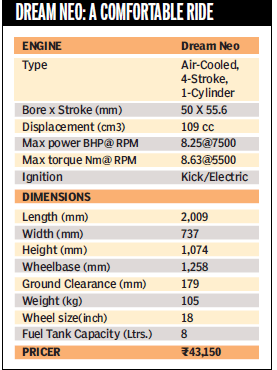 The Neo as a standalone bike is an attractive vehicle for commuters. The bike has a long wheelbase, giving it good stability, and its seat is the longest in the category. Ground clearance at 179 mm is excellent, the suspension sufficiently comfortable, and with 8.25 BHP of power and 8.63 Nm of torque, the bike has sufficient grunt to satisfy the occasional adrenalin rush. Overtaking is no issue, turning and handling are quite good.

The best part of the Dream bikes is probably the mileage. The Neo promises a fuel consumption of 74 km per litre, and Honda credits this to its 'HET' technology (Honda Eco Technology) and a variable spark timing technology that changes as per load conditions to give better combustion, which translate into power and mileage.

So is it your bike? Well, if you are a commuter, if mileage is your thing, and if you find the Dream Yuga too flashy, the Neo should be right up your street. The really long seat, the upright stance and the overall performance is more or less the best a commuter can hope for, and the ability to put in a quick sprint, and a top speed of about 90 kph that it can hold without losing wind, make it an excellent commuter bike. It does not have disc brakes, but its starting price is ₹ 43,150 (ex-showroom, Delhi, for kick-start model) — which in itself is a compelling argument.