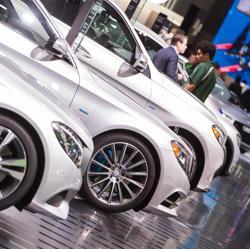 A line of Mercedes sit on display at the 2017 North American International Auto Show in Detroit, Michigan.

Demonetisation slowed the pace of the auto industry in December with monthly sales in India declining by 18.66%, a 16-year-low.

According to latest data released by Society of Indian Automobile Manufacturers (SIAM), major segments, including scooters, motorcycles and passenger cars, witnessed record decline in December sales, owing to negative consumer sentiments after ₹500 and ₹1,000 banknotes were scrapped by the Narendra Modi government on November 8.

"This is the highest decline across all categories since December 2000, when there was a drop of 21.81% in sales. The reason is largely due to the negative consumer sentiment in the market due to demonetisation," Vishnu Mathur, director general of SIAM, said.

Mathur, however, said the drop in sales is temporary but how sales pick up would depend a lot on "how the budget comes up with steps that will boost consumer sentiments and increase disposable income besides improving the overall economy".

"Almost half of two-wheelers sales comes from rural markets, which have been hit hard by demonetisation," Mathur said while explaining why the segment has suffered a big blow in December.

Mathur said whatever sales December witnessed were "driven by the largest discounts ever that the industry has seen".

He further said that moderation in sales in the auto industry is expected to continue this month as well as consumers defer purchases on Budget expectations.

"At present, there is stock inventory of almost one month in the auto industry, which will have to be cleared," he added.

When asked if SIAM would revise its growth forecast for the ongoing fiscal for passenger vehicles, considering the drop in sales in November and December, he said the industry body hasn't looked at the matter yet.

"However, with the way things are going and if the Budget doesn't bring big steps to boost consumer sentiments, we may miss our forecast," Mathur said.

Last September, SIAM had revised upward its growth estimate for passenger vehicles for the ongoing fiscal to 10-12%. The segment was originally pegged to grow at 11-13% but was later revised downward to 6-8%.

Mathur said that the auto industry hasn't yet benefited from a good monsoon and 7th Pay Commission payouts and a lot would depend on the Budget going forward.

According to SIAM data, in the cars segment, market leader Maruti Suzuki India saw its domestic sales decline by 10.93% in December at 81,092 units as against 91,043 units in the same month a year ago.