Celebrating 30 years of the Porsche 959

The vehicle that redefined the benchmark for performance and ushered in the age of the 1980s supercar is being honored by Porsche at the AvD-Oldtimer Grand Prix (OGP) on the Nürburgring in Germany this weekend.
By : AFP
| Updated on: 06 Aug 2015, 12:47 PM 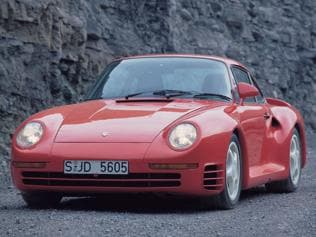 The vehicle that redefined the benchmark for performance and ushered in the age of the 1980s supercar is being honored by Porsche at the AvD-Oldtimer Grand Prix (OGP) on the Nürburgring in Germany this weekend.

It may be slowly moving into middle age but even by today's standards, there is absolutely nothing slow about the Porsche 959. A technological tour de force it featured what was the most complex and intelligent four-wheel drive system ever fitted to a road car plus sequential turbochargers to eradicate acceleration delays and to force 450hp out of its 2.85-liter six-cylinder engine.

And the result of all this wizardry? The fastest production car in the world. Zero to 100km/h was taken care of in 3.1 seconds and the 959 was the first supercar capable of knocking on the door of 200mph. Porsche said its top speed was 314km/h (195mph) but owners claimed that the official figure was on the conservative side.

In fact, the car was so revolutionary that it sent everyone from Lamborghini to Ferrari back to the drawing board in search of meeting or beating its vital performance statistics. It's the reason why the Ferrari F40, which launched two years later, had a top speed of 201mph and why right up to today, a supercar is not deemed super unless it can hit that top speed.

Further adding to its mythical status is the fact that Porsche only built 292 road-going versions in total and because the company refused to give the US government four examples for crash testing, it was illegal to own one in the US. However, despite being forbidden fruit, it didn't stop a host of individuals trying to import a 959 into the States including Microsoft co-founder Bill Gates whose car was impounded by customs upon arrival and was held for over 10 years.

Today it is legal to own and drive a 959 in the US and much of this is thanks to Gates and his friends. He fought to get the 'Show and Display' law passed, an act that enables certain cars to be imported into, owned and driven in the US that don't meet Federal Motor Safety Standards if they represent 'historical or technological significance' and were built in small numbers (fewer than 500 examples). And luckily, the 959 meets and succeeds all criteria.

As well as parading a rally and road-going version of the 959 around the circuit, the special Porsche Classic event, which runs August 7-9, will also feature a guest appearance from racing legend Jacky Ickx plus workshops from Porsche experts on the finer points of classic Porsche restoration.