Car-sharing startups emerge from pandemic with new lease on life

Getaround has raised at least $839 million since its founding in 2009, according to PitchBook, including $140 million as recently as October.The rise of the robotaxi -- driverless vehicles capable of taking passengers anywhere, anytime -- ultimately may doom the current car-sharing business model.
By : Bloomberg
| Updated on: 30 Apr 2021, 16:48 PM 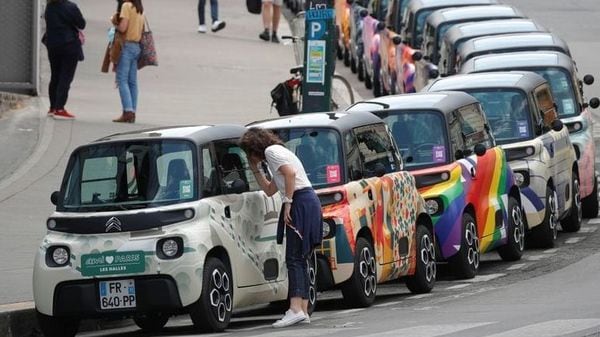 A pair of car-sharing companies that have outlasted more-established challengers and survived the pandemic are looking to bolster their balance sheets by tapping into Wall Street’s fascination with auto-related startups.

Much like Airbnb Inc. revolutionized the concept of overnight accommodations, peer-to-peer platforms create a market for car-sharing to link parked vehicles with those in need of a ride. The concept has been around for years: Two of the larger players, Getaround Inc. and Turo Inc., were both launched more than a decade ago and have become part of the growing mobility industry.

That offers some appeal to those priced out of used cars or unable to find rental cars due to a shortage of new vehicles.

Neither startup owns any vehicles. Both rely on car owners who sign up with their online apps to supply them -- and sanitize them. Users tap their smartphones to unlock nearby vehicles that fit their budget and tastes for trips across town or the country.

Getaround has raised at least $839 million since its founding in 2009, according to PitchBook, including $140 million as recently as October. It’s now considering a public listing as the pandemic wanes, to cash in on investor appetite for car-related startups. “Going public is one -- there’s many others," Karim Bousta, Getaround’s chief executive officer, said of the company’s possibilities in an interview.

Turo, also established in 2009, has raised at least $496 million, according to PitchBook. It’s looking at “all options over the next few months," Turo CEO Andre Haddad said in an interview.

The quest for new funding comes at a fortuitous time: Many auto-related enterprises have raised billions of dollars on the promise of their developing technologies. Startups ranging from vehicle data managers to parts makers and full-fledged electric-car manufacturers have benefited from an investment boom fueled by a rally over the past year in shares of EV-market leader Tesla Inc.

It’s unclear if car sharing will fully recover even as people emerge from lockdowns and resume travel routines. But the two startups say business is recovering in step with the broader economy as workers return to offices and more vacationers book trips.

“As the most recent round of lockdowns has begun to subside, Getaround has already seen a 40% increase in weekly revenue since February," said Bousta, a former Tesla employee who took over the CEO role in December 2020 as founder Sam Ziad became executive chairman.

Haddad said Turo has seen a “strong bounce back" and is confident rising vaccination rates will lead to more hustle and bustle.

Asad Hussain, a senior analyst at PitchBook, said car-sharing has been surprisingly resilient despite continued fears about exposure to Covid-19. “The industry is intact," he said. “It’s definitely been hurt, but it’s rebounding."

Turo host Bob Aiello manages a fleet of 33 cars, 19 of which are Tesla models, based in Jersey City, New Jersey, and has begun sanitizing cars with disinfectant wipes between renters. “If someone were really worried, we would ionize the car," said Aiello.

Car-rental firms instituted similar cleanliness measures to attract customers to their captive vehicle fleets, but many were located around properties such as airports and hotels that suddenly became vacant as the pandemic spread. Now that demand is recovering, they are scrambling to rebuild diminished fleets amid a shortage of new and used vehicles due to automaker production cuts.

The San Francisco-based startups face competition from other online operators, such as Socar and ZoomCar. Those two fleet-based rivals together account for more than half of the $4.4 billion raised since 2014 by car-sharing companies from private equity and venture capital firms, according to BloombergNEF data. Surviving subscription services from Nissan Motor Co., Porsche SE and Volvo Car AB, as well as ride-hailing companies like Uber Technologies Inc., also pose challenges to growth for these startups.

Getaround and Turo have powerful supporters in their respective corners. Getaround has received funding from Toyota Motor Corp. and Turo is backed by Google Ventures, an arm of Alphabet Inc., and the venture capital arms of both BMW and GM.

They provide a relatively low-risk way to bet on mobility services using existing technology at a time when the auto and tech industries are spending billions of dollars to develop next-generation software for fully self-driving vehicles.

The rise of the robotaxi -- driverless vehicles capable of taking passengers anywhere, anytime -- ultimately may doom the current car-sharing business model. BloombergNEF predicts self-driving cars will start to erode the market for shared vehicles by 2035. But some industry observers say the increasingly sophisticated software used in car sharing may actually provide these companies with a leg up in the race to flawlessly operate real-world fleets of vehicles without drivers -- or steering wheels.

“If you believe we’re going to a future where cars become autonomous, the companies that succeed are going to be those that know how to manage car-sharing fleets," said PitchBook’s Hussain.