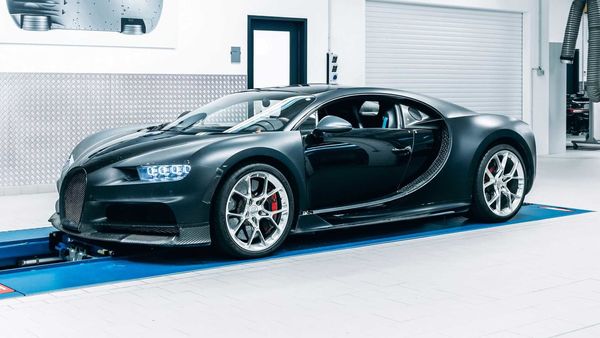 The Chiron 4-005 is one of the eight prototypes of the fastest and one of the most exotic cars from the French hypercar manufacturer, developed to fine-tune the performance.

(Also Read: Bugatti is the other name for breaking speed records over the years)

The Chiron 4-005 is one of the eight prototypes of the fastest and one of the most exotic cars from the French hypercar manufacturer, developed to fine-tune the performance.

Usually, the prototypes designed and developed by every auto manufacturer are meant for the pre-production development of a particular model. However, the Bugatti Chiron 4-005 was built primarily to help in software development for the final production model. These software-related developments included infotainment systems, powertrain functions etc.

The Chiron 4-005's 4 indicates towards the prototype built and 005 is the chronological number. The particular Chiron prototype was one of the very first ones to scorch the roads in the United States. This one had appeared for high-speed laps at Nardo, heat tests in South Africa, snow testing in Scandinavia. All of these test runs have left scars across its exterior.

Many of the Bugatti Chirons has scorched more than 1,600 kilometres with their ultra-high performance. But this 4-005 model, being a prototype, has covered more than 80,000 kilometres. Bugatti says that it even had to bear the heat of the roaring afterburner of a Eurofighter Typhoon fighter jet.

The prototype has gone through tons of software upgrades for delivering optimum allover performance across all locations.

While the automakers usually crush the prototypes to avoid them landing into public hands. It is not sure what will happen to the Bugatti Chiron 4-005. Bugatti has said that the prototype is going into its well-earned retirement, which indicates that we might see this car again someday.