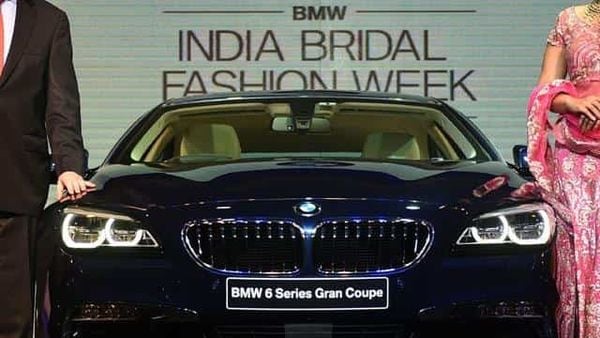 The model will come in two variants-- the BMW 640d Eminence priced at ₹ 1.14 crore and the 640d Design Pure Experience version tagged at ₹ 1.21 crore.

The company introduced the new car at the preview of the BMW India Bridal Fashion Week 2015 to be held in the Capital from July 15-19.

Speaking on the occasion, BMW Group India President Philipp von Sahr said: 'It is the perfect platform for the launch of the new BMW 6 Series Gran Coupe which combines luxury and immaculate design with sports performance.'

The BMW 6 Series Gran Coupe would be available across the country as a completely built-up (CBU) unit from today onwards.

BMW plans to launch 15 models during this year, with four brand new models that would be imported from our global centres and the rest will be re-launches.

The company used to be a market leader in the luxury car space in India before its compatriot Audi overtook it.

Currently, it is at number three behind Audi and Mercedes in the luxury segment in terms of volume.

In the race for the number one spot, Mercedes has toppled Audi in the first quarter of 2015 with a massive 40 per cent rise in sales. While Mercedes-Benz sold 3,566 units during January-March, Audi sold 3,139 units during the period at a growth of 15 per cent. BMW hasn't shared its sales figures for the quarter yet.

Currently BMW sells more than a dozen models in India out of which eight assembled locally at its Chennai plant, which has an installed capacity of 14,000 units per year at three-shift schedule. It is focusing on increasing localisation of content in India.

BMW India began operations in March 2007 and has since then invested ₹ 490 crore.