Auto industry shows off car cockpit of future at IAA

Imagine climbing into your car seat exhausted but knowing you have to keep awake for the long drive home.
By : AFP
| Updated on: 21 Sep 2015, 11:15 AM 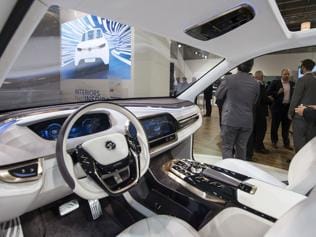 Yanfeng Automotive Interiors (YFAI) displays an autonomous concept car with a retracting steering wheel and seats rotating towards each other for an easier conversation during a press day of the 66th IAA auto show in Frankfurt am Main, western Germany, on September 16, 2015. Photo:AFP

Imagine climbing into your car seat exhausted but knowing you have to keep awake for the long drive home.

That may not be a problem if the car is fitted with a seat which can detect and react to the physical and mental state of the driver.

If a driver is stressed, the seat can give them a soothing massage. If they are tired, it can stimulate them to wake them up.

The futuristic seat designed by French parts supplier Faurecia is among car cockpit innovations that are being unveiled at the IAA car show, with the promise to transform vehicles into a cross between a mobile sitting room, connected office and a space for relaxing in.

With their futuristic designs, state-of-the-art materials and intelligent dashboards, a number of new concept cars are the stars of this year's IAA, which opened to the world press on Tuesday and is scheduled to welcome the general public from Saturday.

Completely driverless cars may still be some way off, but 'autonomous driving is arriving at full speed,' said Han Hendriks, vice-president of sales and product development at Yanfeng Automotive Interiors.

The China-based parts supplier, present for the first time this year at the IAA, showed off its avant-garde car interior crammed with innovations, such as retractable steering wheel, a revolving driver seat, on-board refrigerator and an Internet screen for passengers.

'In future, people are going to be less involved in the driving of their cars. So they'll need to be occupied with other things. People's behaviour and well-being in their cars will change. That has never been much of a priority for the industry so far. But it will become a predominant issue,' said Christophe Aufrere, technical director at French parts supplier Faurecia.

'The interior furnishings will become increasingly important, as well as the functions for interacting with the vehicle,' said Hendriks at Yanfeng Automotive Interiors.

In the future, 'a car's interior will increasingly integrate elements for entertainment, such as larger screens for games, videos, social media,' but also access to emails and even holding video conferences with colleagues, he said.

In particular, huge advances made in windscreen technology would open up new opportunities, whether in augmented reality while driving, or communication and entertainment solutions, industry experts say.

Within a few years, drivers may no longer need to turn their heads to consult GPS navigation screens. Instead, a holographic image could appear on the windscreen showing the correct route.

While such technology is still not widely available, its use could quickly become more widespread as younger generations who have never known a world without smartphones learn to drive.

'The digital generations that are used to seeing the world via different screens will expect the same intuitive interconnectivity as with their smartphones,' the specialist automobile magazine Carglass wrote in a recent edition.

In the future, the car will be able to 'completely change its ambiance, its temperature, humidity, lighting, and music. It will be able to positively influence the occupants' mood. We're seeing a lot of potential in this direction,' said Daimler chief executive Dieter Zetsche.

French carmaker Peugeot is scheduled to lift the veil on its concept car, Fractal, an electric car that uses cutting-edge audio technology to eliminate road and wind noise from the outside and transform the acoustics of the sound system on the inside into those of a concert hall.

'There is undoubtedly a lot of fantasising and dreaming going on, but it's clear that the car's interior is being redefined,' said an auto sector consultant, Laurent Meillaud.

'It's still difficult to predict with any certainty which innovations will catch on, but you can certainly say that there are no longer any taboos,' he said.