Home Auto News A Swedish Broadside For The German Trio

A Swedish broadside for the German trio

Now, Swedish carmaker Volvo has joined the list with an offering that squares with what the other major car manufacturers are doing.
By : Hindustan Times
| Updated on: 04 Jul 2013, 16:31 PM

A Swedish broadside for the German trio

India's luxury car segment is on a roll. This year, almost a dozen cars -- big and small, absolutely new and not so old -- have been launched so far. The big two, BMW and Audi, are riding high on small compact SUVs. 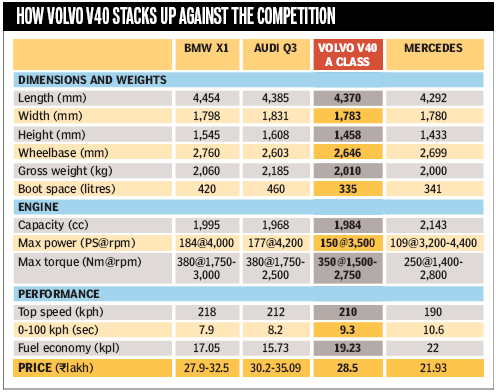 Mercedes is betting big on its small cars A and B class. Now, Swedish carmaker Volvo has joined the list with an offering that squares with what the others are doing. Its V40 cross-country is essentially a European compact car that has been tweaked with a higher ground clearance to give a raised stance. And it is priced right alongside the X1s and the Q3s. Will Volvo convert the competitive trio into a foursome?

An SUV or a compact car?
A bit of both. The size definitely is not compact. At nearly 4.4 metres, it is more in the league of a X1 and Q3 than the A-class. The cross country's ground clearance has also been raised by 40mm over the standard V40. But its relatively short height makes it appear like a long-wheelbase compact car than a shortened utility vehicle.

Dimensions apart, design is one of the strong points of this car. It has the signature Volvo looks that stand out in the melee of other equally delectable cars. The protruding snout, the mesh grille, the deep-set pear shaped headlamps, all give it and aggressive appearance. Ditto for the all black roof that gives it a touch of 'premiumness'. Things get even better at the rear, where the signature curved trapezoidal tail lamp combine well with the black tinted rear glass.

Step inside the cabin and there is a feeling of déjà vu, though. The dashboard looks like any other Volvo. There is generous dose of leather, from the steering wheels, seats, handbrake handle to the gear lever. The central console, with its large dials, is easy to read and use but minimalistic. 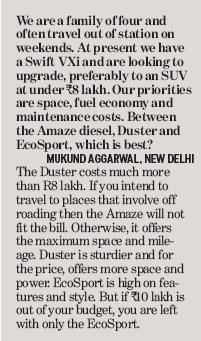 Volvo's preference for brushed metal in the centre over a wooden finish continues. The TFT screen and panaromic sunroof do try to break the monotony, but the car still does not exude the extravagance of, say, an Audi Q3. Space at the rear is generous but the boot, at 335 litres, is on the smaller side.

Features galore
Volvo is a name to reckon with when it comes to safety, and the V40 is right up there. Seven airbags, ABS and traction control, rear parking cameras, brake distribution, you name it and it is there. There is also an active driving safety feature, which makes the car brake on its own if its senses danger of a collision. And it brakes quite hard.

Some boxes, however, are left without a tick. Lack of a navigation system or paddle shift gears, for instance. There is also no 4-wheel-drive option. And no spare wheel, either, just a puncture kit. Ouch!

Rock-steady drive
There is only one engine, a 2 litre diesel, doing duty in this car. And it is good enough, there are fewer takers for petrol in this segment anyway. It develops 150 hp power and 250 Nm torque, which slots the V40, like everything else, right between an SUV and a compact car.

Mated to a 6-speed transmission, the car is quick off the blocks and very steady. The suspension has been tuned to impart enhanced stability on long winding roads at high speeds, and it shows. Braking performance is impressive too and on the basic aspects or handling, it is at par or even better with its German rivals.

The flip side, though, is that the ride feels a little harsh on the broken Indian roads --- a compromise that the exemplary cornering capabilities call for. The big dampener is its guzzling nature. Our test car returned a below-par 10 kpl, a far cry from the 19 kpl ARAI. Even this figure falls further if the car is pushed around in the sports mode.

Verdict
Volvo's attempt to lure the luxury crossover buyer and the compact car lover with a single product does work, but only in part. The SUV buyer is still more likely to consider the X1 and Q3 because they are not very expensive compared to the V40 and offer more versatality. It offers good performance and is terrific when pushed around.

The compact car buyer will be tempted with this car, as it offers more space, features and the X factor - without being impractical. It will turn heads and like all Volvos, is the safest of the lot. But the fuel-guzzling nature came as a big surprise, especially as it uses diesel.