A Lamborghini hypercar announced for the 2016 Geneva motor show 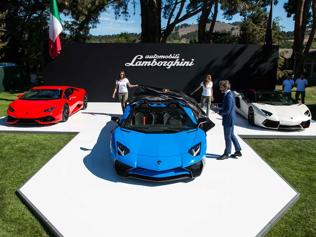 According to the magazine Road & Track, the Italian Lamborghini manufacturer will debut an 800 bhm (596 kW) sports car at the Geneva International Motor Show.

The rumor regarding the existence of a Lamborghini hypercar is not new. In fact, the hypercar was awaited this summer at Pebble Beach and at the Frankfurt Motor Show but to no avail. Road & Track now reports that Lamborghini director Stephan Winkelmann has confirmed the car's official world premiere at the Geneva Motor Show from March 3-13, 2016.

Little is known about the characteristics of the automobile but it has been suggested that it will be a hybridized vehicle equipped with an 800 bhp engine. Production will inevitably be limited to a mere dozen units.

The new model, which could be called 'hyperVeloce,' should be similar to the Bugatti Veyron, McLaren P1, Ferrari, Porsche 918 Spyder and Koenigsegg Regera -- the supercar of all vehicles with a horsepower of 1500 bhp and the ability to go from 0 to 248 mi/h (400km) in 20 seconds.

Lamborghini's most powerful Roadster revealed in the US

Meanwhile, Lamborghini has only just revealed the Roadster version of the Aventador LP750-4 SV (Superveloce) in Pebble Beach. The 750 bhp vehicle will be limited to 500 units. Interested buyers will need to fork out close to 500,000 euros (550,000 dollars) to bring this jewel home come spring 2016. The Roadster should be able to reach a top speed of 217mi/h and go from 0 to 62mi /h in only 2.9 seconds.