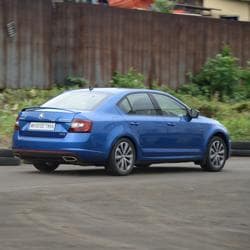 The Octavia is a car that's fun to drive in its standard form. This car, the RS, is the more fun, more performance focused version of Skoda's popular sedan. And, instead of getting a version that's modified for India as was the case in the past, we get the 'proper' Euro-spec RS - the only differences this time round are a slightly raised suspension and smaller wheels compared to the European specs. However against the standard Octavia in India the ride height is still lower.

This car is powered by a 2.0-litre TSI turbo-petrol engine that makes the same 230hp of power as the car sold in Europe. The India-spec car's suspension has been raised a bit, however, it's still 15mm lower than the standard Octavia sold here. The suspension has also been stiffened and reworked given our road conditions. The car features an aggressive body kit, including a rear spoiler and twin exhausts - the RS also comes fitted with new 17 inch 'Anthracite Hawk' alloy wheels that look quite stylish despite being smaller than what the wheel arc is designed to take. On the inside, there's a sporty all-black theme which will also be far easier to maintain. On the equipment front the car comes with the same level of kit as the standard top-spec Octavia TSI. The flat-bottomed RS steering wheel with paddle shifters behind the wheel and a pair of super supportive leather and Alcantara sports seats that are contrast-stitched in red, lend the insides its sporty quotient. Power is sent from the engine to the car's front wheels through a six-speed DSG (dual-clutch) automatic gearbox, via a limited slip differential to transfer the power cleanly to the road. The car also comes with larger-diameter disc brakes to be able to reign in the increased power. To get a good taste of it's performance we took the vRS out for a short spin on a track in Mumbai but one that's pretty tight and tiny being designed for go karts and drift cars. 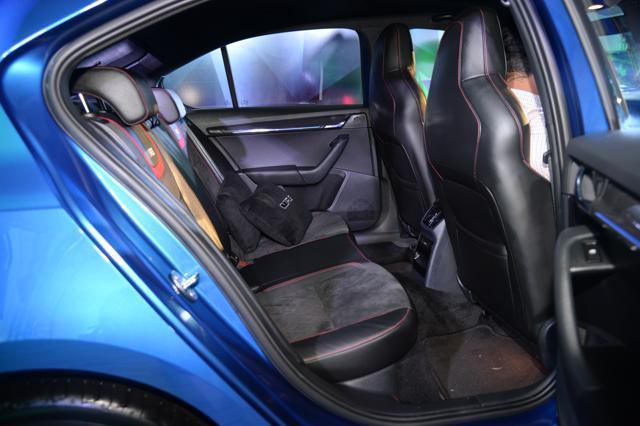 Put your foot down on the accelerator and the car jumps off the mark with tremendous urgency. But it can almost feel civilized to drive, and even sounds tame - this isn't one of those engines that shouts when you put your foot down. The car does make a nice raspy sound when you push it to its limit - you can hear the occasional 'pop' sound from the exhaust when you change gears. It sounds a whole lot nicer from the outside than when you're sitting in the well-insulated cabin though.

The gearshifts are very quick and the gearbox adapts quite well to unpredictability. Put it in Sport mode and the car holds each gear for longer and the engne will rev till the 6000rpm mark. But with the paddles in use it will rev till nearly 7000rpm.

Body control in this car feels good when you're taking turns at high speeds, thanks to the lowered and stiffened suspension. We couldn't get a full indication of the handling since the test car's tyres were a bit worn out and the track was quite wet because of rain. The car felt very quick though and thanks to the lowered and stiffened suspension, it is loads of fun to throw this car into a tricky turn or two. Throw it into some really tight turn though and it does feel a bit fidgety but this could also be down to the track conditions.

The price-tag may seem a bit high, but for the kind of performance this car gets, you would require to spend a more money. Plus a fully loaded standard car costs well over 20 lacs as well. The car's predictable and offers a very satisfying driving experience. Previous versions of the vRS have attained a sort of cult-like status in our country amongst performance enthusiasts, despite not being the same specifications as the European car. So, this new 'proper' Octavia RS should definitely follow suit and may just find a lot of takers in our market.