Kia Motors’s Seltos is equipped all the standard systems that are expected in an SUV—anti-lock braking system, LED headlamps, a brake-assist sytem, dual exhaust pipes, rear parking sensors among others. The Seltos will be priced between Rs 9.69 lakh and Rs 15.9 lakh.
By : Hindustan Times, New Delhi
| Updated on: 22 Aug 2019, 06:15 PM 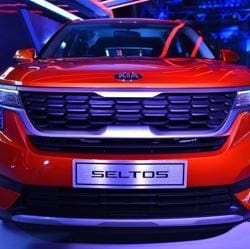 Kia Motors on Thursday launched the Seltos in India. The compact SUV is expect to do well Indian market. There is a lot of anticipation for the Seltos and there were 6,046 bookings in the first 24 hours since the booking began. The KIA Seltos will be priced between ₹9.69 lakh and ₹15.9 lakh. The model comes in both petrol and diesel variants.

Kia Motors has already sounded a waring to its rivals in the India auto market with its very aggressive pricing for the Seltos. The main competitors of the Seltos in this segment are Hyundai Creta, Renault Duster and Brezza from the Maruti stable. KIA's all-new copmact SUV might also face stiff competition from the higher priced Jeep Compass and MG (Morris Garages) Hector.

"Distinctive, Powerful, Wide, and Bold. That's what makes the #KiaSeltos #BadassByDesign! And with 6,046 bookings in the first 24 hours itself, we are excited to continue expanding in the Indian market. #SeltosIndiaLaunch," Kia Motors India tweeted on Thursday.

South Korean auto major KIA began its operations in India with 265 touch points across 160 cities. The KIA Seltos will be available in two variants— the GT line and the tech line. It is available in 16 variants across eight trims. The Seltos is equipped all the standard systems that are expected in an SUV—anti-lock braking system, LED headlamps, LED fog lamps, a brake-assist sytem, dual exhaust pipes, rear parking sensors among others.

The Kia Seltos is BSVI compliant and three years' unlimited warranty will be offered with the vehicle. 1.5-litre petrol, 1.5-litre diesel and 1.4-litre turbo petrol are the three engine options on the Kia Seltos. A three-year kilometre warranty is provided by Kia for the Seltos. This can be extended by two more years.

Kia has entered the Indian market at a time when the domestic automotive industry is facing the worst slowdown in more than two decades. The company has already seen as many as 32,035 bookings till date, said Manohar Bhat, vice president and head of marketing, Kia Motors.

Kia, the world's eighth largest automaker, began the trial production of Kia Seltos in January. Seltos is KIA Motors' first made in India mid-SUV and is being rolled out from the company's plant in Andhra Pradesh's Anantpur.

The 536 acre-Anantpur facility is capable of an annual production capacity of up to 300,000 units, boosting Kia's global manufacturing capability, the South Korean automaker had said.

The pre bookings for Seltos SUV commenced online as well as on its 206 sales points in the country on July 16. Kia says it has manufactured over 5,000 units of the Seltos in order to lessen the waiting period and cater to the demand.