The high-voltage battery pack placed underneath the Bolt vehicles' backseat’s bottom cushion are made by South Korea's LG Chem.General Motors will replace the vehicles' lithium ion battery modules with new modules rather than replacing entire battery packs.
By : HT Auto Desk
| Updated on: 17 Aug 2021, 09:51 AM 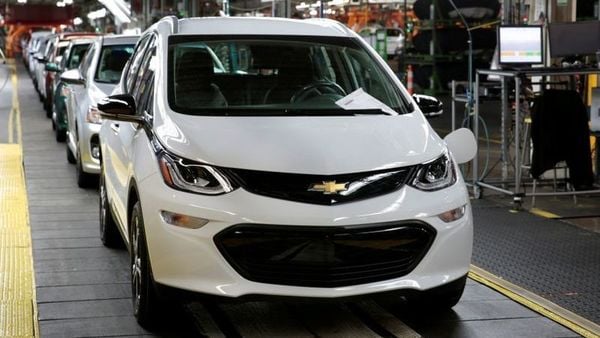 General Motors will replace all battery modules in some Chevrolet Bolt electric vehicles (EVs) that it recalled last month due to risk of catching fire. These vehicles were recalled for the second time in less than a year. The company could start replacing the modules as early as later this month.

The 50,000 recalled Bolt electric vehicles belong to 2017-2019 model year. They were recalled after there were two reports of fire incidents after the initial recall, including one in a Bolt that had updated software. The US auto safety regulators had even asked the owners to park their vehicles outside and away from homes or other structures post charging as they face risk of catching fire.

General Motors will replace the vehicles' lithium ion battery modules with new modules rather than replacing entire battery packs. "The battery pack case, wiring and the other pack components are not defective and do not need replacing," GM said.

The high-voltage battery pack placed underneath the Bolt vehicles' backseat’s bottom cushion are made by South Korea's LG Chem. A spokesperson for LG Energy Solutions (LGES), a wholly owned LG Chem battery subsidiary, told Reuters, "Will actively cooperate to ensure that the recall measures are carried out smoothly."

(Also read | From Hyundai to Tesla and BMW, battery fires turn the heat on electric cars)

As precautionary measures to avoid catching fire, General Motors had also asked the Bolt owners to charge their vehicle after each use and avoid depleting the battery below approximately 70 miles of remaining range, son as to reduce the risk of a fire. The automaker is still recommending the customers to park their vehicles outside the house immediately after charging and not leave them charging overnight. It said that customers should also seek out the software update issued as part of the initial recall.

The US National Highway Traffic Safety Administration (NHTSA) had first opened an investigation into the fire risk of Chevrolet Bolt EVs in October last year.