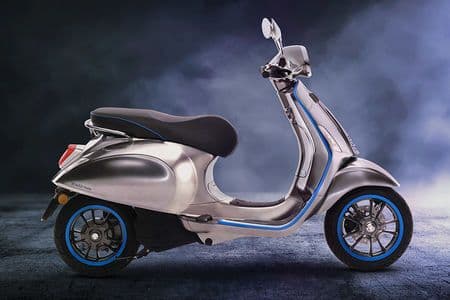 Vespa Elettrica
The Vespa Elettrica is the pure electric offering from Vespa for the new age. Vespa has tied up with the “(RED)” organization and pledged to donate $100 from every Vespa Elettrica (RED) edition sold to fight AIDS and COVID.
Vespa Elettrica Expected Launch Dates:
Vespa showcased the Elettrica at the Auto Expo 2020. Although Vespa hasn’t officially announced its release in India, it is expected to be launched later in 2023.
Vespa Elettrica Price:
The Vespa Elettrica 25 kmph is the base variant that is sold in the European Union at 6,500 Euros (approximately 5.32 lakhs INR). The high-end Vespa Elettrica 70 kmph variant is sold in the European market at 6,700 Euros (approximately 5.50 lakh INR). Vespa’s Elettrica variants are based on their top speed. They come in Vespas Elettrica 45 kmph, Vespa Elettrica 70 kmph, Vespa Elettrica RED 25 kmph, Vespa Elettrica RED 45 kmph and Vespa Elettrica RED 70 kmph. Vespa India has hinted that the Elettrica variants will be made in India by its parent company, Piaggio. The prices mentioned above could vary.
Vespa Elettrica Design:
The electric version of Vespa retains most of the design from the VXL models. The round headlight, bold-looking apron, and iconic curves on the sides are maintained in the Vespa Elettrica variants. The Vespa Elettrica comes in Chrome-Grey. The Vespa Elettrica (RED) on the other hand, comes in Rosso Passione (red) which includes a red-colored seat. The beading around the apron of this e-scooter can be customizable with a color of the owner’s choice. The beading colour choices are Azzuro Elettrico (blue), Verde Boreale (green), Giallo Lampo (yellow), Cromo (chrome), Nero Profondo (black) and Grigio Fumo (grey).
Vespa Elettrica Dimension:
This e-scooter gives an upright and comfortable riding posture. Although it weighs 130 kilograms, the riding posture would allow the rider to maneuver the vehicle well. The 790 mm seat height is 20 mm higher than other Vespas but it shouldn’t matter much. The high-end suspensions on both ends will ensure a smooth ride.
Vespa Elettrica Features:
The Vespa Elettrica gets a fully-digital multimedia instrument cluster with smartphone connectivity and navigation. The LED DRL sits comfortably within the round headlight. A full LED lighting set-up is also expected in this scooter. The under-seat utility box is large enough to hold medium sized helmet. The utility box is also most likely to get a light as well as a USB charging port.
Vespa Elettrica Engine and Performance:
All the variants of Vespa Elettrica will get a 48V, 86 Ah, 4.3 kWh battery that gives a continuous power of 3.5 kW. Depending on the models, their top speeds are restricted to 25 kmph, 45 kmph and 70 kmph.
Vespa Elettrica Mileage:
The battery recharge cable on this scooter is located under the seat. The cable just has to be connected to electrical sockets to charge. The battery can be charged fully in 4 hours. All variants of the Elettrica except the 25 kmph model gets ‘eco’ and ‘power’ modes. The 45 kmph and 70 kmph versions has a range of 100 kilometers per charge in eco mode. The 25 kmph model on the other hand, can go 120 kilometers in a single charge.
Vespa Elettrica Rivals:
Direct rivals to the Vespa Elettrica include Ather 450X, Ather 450 Plus, TVS iQube, Bajaj Chetak, Ola S1 and Ola S1 Pro....Read MoreRead Less

No Vespa Dealers Found in Delhi