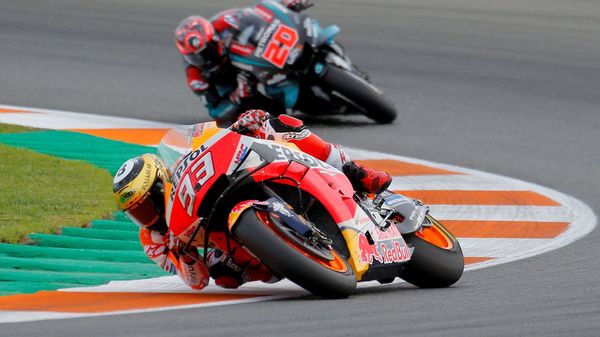 Thailand's MotoGP was postponed over the new coronavirus on Monday as motorcycling's premier championship took its second hit in two days from the deadly outbreak.

A day after the season-opening Qatar MotoGP was axed, Thailand organisers postponed the March 20-22 race in Buriram without setting a new date.

"I don't say it's cancelled, I just say it is postponed until time allows us to do (the event)," Anutin Charnvirakul, chairman of the Thailand MotoGP organising committee, told AFP.

"It's because of the coronavirus," added Anutin, who is also Thailand's deputy prime minister and health minister.

"We need to postpone it today until further notice."

The move means both of the season's first two races have been shelved. The next race on the schedule is in Austin, Texas on April 5.

It could also put renewed focus on Formula One, whose season starts with the Australian Grand Prix on March 15.

The Chinese F1 Grand Prix has already been postponed, and Vietnam is due to host its inaugural race in Hanoi on April 5.

However, Hanoi's mayor said last week that the city was "ready to cancel it in case of the epidemic's progression".

The virus originating from China, which has killed more than 3,000 people worldwide, has had a heavy impact on sports events, forcing a long list of postponements and cancellations.

"The committee decided to postpone the race due to the wide spread of COVID-19 around the world," Anutin said in an organising committee statement.

"People who attend, racers and teams could come from at-risk countries. Thailand has to postpone for the safety of Thai people until the situation is better."

- 'Best interests of the nation' -

Anutin himself had vowed "no cancellation" on Friday.

But on Sunday, Thailand's health ministry said a 35-year-old Thai man passed away due to complications caused by the coronavirus.

"Things change every day and it has become pandemic," Anutin told AFP on Monday.

"We have to go along with the circumstances worldwide and it (postponement) is in the best interests of the nation as well as the participants."

"FIM (the International Motorcycling Federation), IRTA (International Road-Racing Teams Association) and Dorna (the commercial rights holder to MotoGP) are currently evaluating if an alternative date is possible for the event later this season," MotoGP said in a statement.

As the coronavirus has spread, Italy has become the hardest-hit European country with 34 deaths and more than 1,600 confirmed cases.

Italian drivers play a "vital role in the championship", said the international motorcycling federation on Sunday following the cancellation of the race in Qatar, which is restricting arrivals from Italy.

Six riders in the elite class are Italian, including seven-time world champion Valentino Rossi as well as 2019 runner-up Andrea Dovizioso, while Ducati and Aprilia are leading Italian manufacturers.

Thailand currently has 43 confirmed cases of COVID-19. The bulk of those infected are Chinese tourists or Thais who have come into contact with travellers.

Much of Thailand's tourism sector is reliant on Chinese holidaymakers, and the country anticipates shedding five million visitors this year due to the virus -- a revenue hit of more than $8 billion.

The MotoGP event in Buriram brought in three billion baht ($94 million) each of the last two years it was held, Anutin said last week.