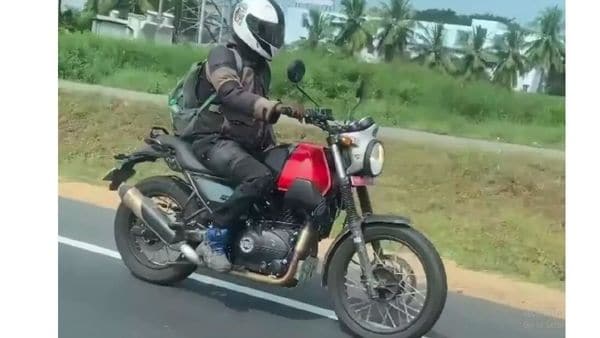 Royal Enfield Scram 411 will be launched in India in February 2022.

Royal Enfield has big plans for the upcoming year. It is gearing up for the launch of a new motorcycle which will basically be a derivation of its much popular Himalayan ADV. The upcoming new Royal Enfield bike will be called the Scram 411 and will come out to be a more road-biased version of the Himalayan adventure motorcycle.

The Royal Enfield Scram has now been spotted in a new dual-tone paint theme doing testing rounds on the public roads. For the record, the motorcycle has been spotted a number of times in the past but the new images showcase the red and black dual-tone paint scheme for the very first time.

The spied prototype can be seen sporting a dual-tone red-black fuel tank while the rest of the body panels are dipped in black. It can also be seen sporting a brushed aluminum finish on the front cowl surrounding the circular headlamp. Save for these details the basic design and layout reminds of its donor model, the Himalayan.

The Scram 411 is said to be riding on a smaller 19-inch front wheel, as opposed to the Himalayan's 21-inch unit. The rear wheel, however, remains the same 17-inch spoke wheel.

At the heart of the Scram will sit the familiar 411cc, single-cylinder unit that is known to churn out 24.3 bhp of maximum power.

If you recall, HT Auto was the first to break out the story that Scram 411 is slated to go on sale in February next year. Upon launch, it will be priced somewhere close to ₹1.90 lakh (ex-showroom).