Home Auto Two Wheelers Royal Enfield Grows By 133% In May Due To High Demand Of Classic 350, Meteor

Royal Enfield grows by 133% in May due to high demand of Classic 350, Meteor 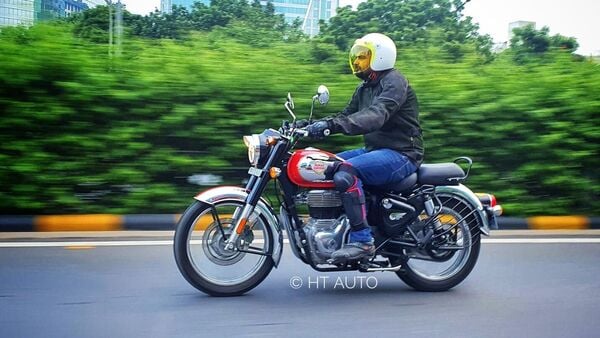 Royal Enfield Classic 350 is the most-selling bike from the company in India.

Royal Enfield announced recently that it has managed to retail a total of 63,643 motorcycles in the month of May'22. This is significantly up from 27,294 motorcycles that the company managed to sell in the corresponding period a year ago. This translates to direct growth of close to 133% when compared to the pandemic affected May last year.

The Classic 350-maker further added that it has managed to sell its highest ever - 10,118 motorcycles in overseas markets, taking the overall international YoY sales growth to over 40%. In terms of monthly growth also, the company managed to report positive growth over April 2022.

Taking YTD performance into account, Royal Enfield recorded an overall growth of 56% by retailing 1,25,798 bikes. This is considerably higher than the 80,592 units retailed in the same period a year ago.

The Classic 350 is the most popular model from Royal Enfield in the Indian market. It was also given a new generation update in 2021, back then it was updated with a whole new engine and platform borrowed from the Meteor 350 motorcycle. Royal Enfield also recently announced the sale of Classic 350 and Meteor 350 bikes in the Malaysian market.

Meanwhile, a few weeks back, the company announced the celebration of its long-standing association with the Indian Army with a special commemorative sculpture - the ‘Tornadoes Wall’ in Bengaluru. In addition, the company had also announced the appointment of B Govindarajan as CEO Royal Enfield earlier this year.