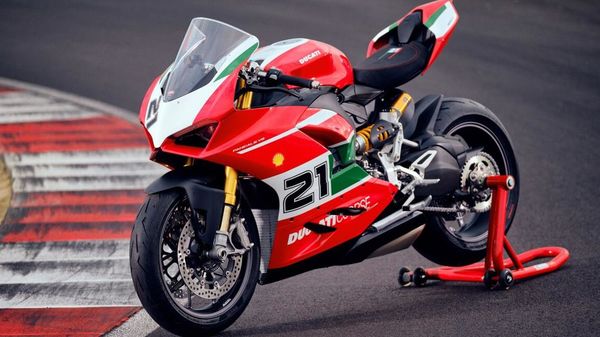 The bike also sports the number 21 which is Troy Bayliss' race number.

The exterior paint scheme of the motorcycle takes inspiration from the 996 R racebike on which Bayliss scored his first win in the 2001 season. The bike gets a base Ducati Red theme with a green and white colour pattern paying tribute to its Italian heritage. The bike also sports the number '21' which is Troy Bayliss' race number. Apart from this, it also gets a Shell logo, and Troy's autograph that is placed on the fuel tank.

The hardware kit on the motorcycle includes Ohlins NX30 front forks, a TTX36 rear shock absorber, and a steering damper. The model comes close to 3 kg lighter than the standard version thanks to the premium kit it utilises. Its lightweight is also contributed by the lithium-ion battery and a single-seater layout. Some of the optional accessories on the model include a passenger seat and footrests.

Some of the key safety features on the motorcycle include cornering ABS, a bi-directional quickshifter, traction control, wheelie control, and three riding modes (Race, Sport, and Street).

Its India launch details are scarce at the moment, but a few units may also be allotted for the Indian market.