The impounded vehicles were kept not just at the police stations but also in school compounds, parks, private garages and even in open places.
By : IANS
| Updated on: 04 May 2020, 09:17 PM 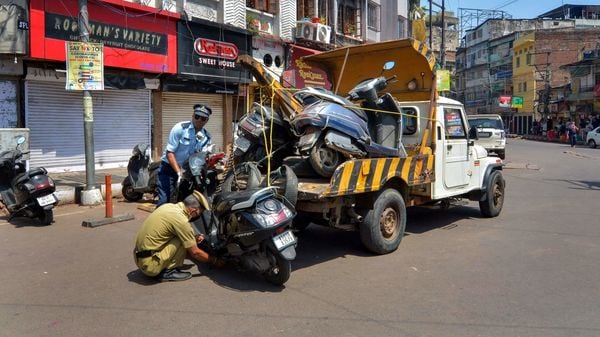 Following appeals from various sections, Hyderabad police have released nearly 34,000 two-wheelers which were seized for lockdown violations since March 23.

Hyderabad Police Commissioner Anjani Kumar on Monday tweeted that the police have released the bikes in the last few days.

(Also Read: Lockdown 3.0: List of cities where Ola and Uber have resumed services)

The top cop, however, cautioned the vehicle owners that restrictions still remain in force and asked them to remain indoors and follow the restrictions to fight Coronavirus.

Telangana police have so far seized over 1.5 lakh vehicles for violation of Covid-19 lockdown. Nearly 1.4 lakh of the seized vehicles are two-wheelers.

Most of the vehicles were seized in Hyderabad, Cyberabad and Racakonda police commissionerates, which cover Hyderabad and surroundings.

Taking care of such a large number of vehicles had also become a big headache for the police. The impounded vehicles were kept not just at the police stations but also in school compounds, parks, private garages and even in open places.

Police had been confiscating bikes of all those stepping out without any reason. Bikes caught beyond three kilometer distance from the residence of the riders are also being seized. Since only one person is allowed on a two-wheeler, vehicles Awith pillion riders were also confiscated.

Police had stated that the vehicles seized will be released only after lockdown and the owners have to collect the same from court after paying the penalty.

However, the police action had come under criticism from some sections of the citizens. Many complained that their vehicles were seized near their houses and despite their stepping out with genuine reasons and producing the proof.

Even, aid workers had complained that police seized their vehicles. The police tightened lockdown enforcement from April 20 by resorting to large-scale impounding of vehicles.

The All India Majlis-e-Ittehadul Muslimeen (AIMIM) president said many poor people were suffering as their vehicles were seized by the police.