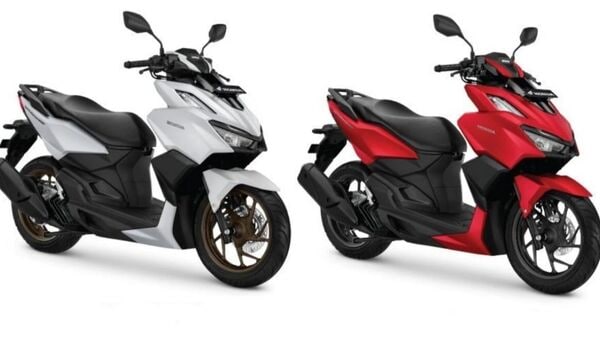 Honda has been selling the Vario scooter since 2006 and it has been updated quite a few times already.

The latest 2022 Honda Vario 160 joins the already existing Vario scooter line-up that includes models such as the Vario 125 and Vario 150. Both the models are quite popular in the Indonesian market.

Honda has been selling the Vario scooter since 2006 in Indonesia and it has been updated quite a few times already. With the latest update, Vario has gained a slew of cosmetic as well as performance tweaks.

On the outside, the scooter gets a fairly sharp and edgy body design which is even bigger than the previous model - Vario 150. At the front, it gets an all-new twin-beam LED headlamp with LED DRL eyebrows that stretch towards the top of the front apron. The company has added turn indicators alongside the LED position lamps that make the front look fairly intimidating. Other exterior highlights include a chunky single-piece grab rail that contributes to a very rugged look, and blacked-out panels including the floorboard, exhaust muffler, alloy wheels, rearview mirrors and a small visor on the handlebar that gives the scooter a dual-tone body appearance.

The scooter also comes with a fully-digital instrument console, a huge 18-litres of boot, standard USB charger and disc brakes. The meter console on the scooter is capable of displaying an array of information including fuel level, distance covered, average fuel consumption, speed, etc.

At the heart of the scooter sits a 160cc single-cylinder, liquid-cooled engine that is known to push out 15 bhp of maximum power backed up with 13.4 Nm of peak torque. For the record, the overall output of this scooter is comparable to the Yamaha Aerox 155.

Vario 160 rolls on 14-inch alloy wheels shod with 90/80 section and 100/80 section of tyres. The chunkier tyres have been added to aid the overall handling of the scooter. Also, it gets dual-channel ABS as mentioned before.