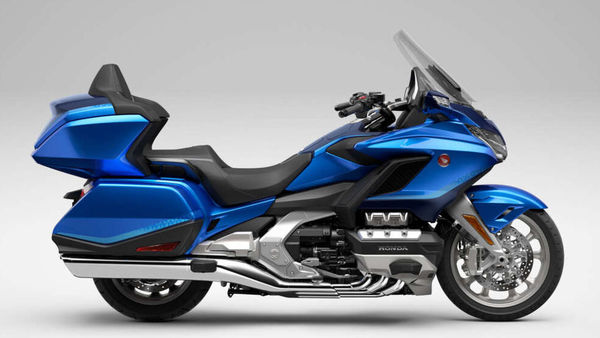 Honda Motorcycle has rolled out the updated 2022 GL1800 Gold Wing (plus the Gold Wing Tour model) with new colour options and features. Apart from the new Gold Wing, Honda has also updated other bikes in the lineup such as the CMX1100 & CMX500 Rebel models.

Honda's flagship long-distance luxury touring model has received striking new colours updates for 2022. The GL1800 Gold Wing ‘Tour’ with manual transmission will now be made available in Gunmetal Black Metallic, finished off with a new ‘blacked out’ engine. The DCT/Airbag trim of the Gold Wing Tour now gets new Glint Wave Blue Metallic and Pearl Glare White paint options for 2022. These options will be made available with an already sold Gunmetal Black Metallic colour scheme. That said, the DCT-only GL1800 Gold Wing will boast a new Mat Jeans Blue Metallic colour.

(Also Read: Honda RC213V-S becomes the most valuable Japanese bike to be ever auctioned)

The heart of the motorcycle continues to remain the same 1,833 cc, flat-six, liquid-cooled, BS-VI engine. This powertrain has been rated to deliver a maximum power output of 124.7 bhp at 5,500 rpm and 170 Nm of peak torque at 4,500 rpm. The engine comes with a 6-speed manual or 7-speed DCT gearbox.

Some of the key features of the bike include a 7-inch TFT screen, gyrocompass navigation, Apple CarPlay, Android Auto, electric screen, Smart Key operation, 4 riding modes, HSTC and Hill Start Assist – underlining its status as a flagbearer for new technology.

The model year 2021 GL1800 Gold Wing was also launched in the Indian market a few months back and was sold out within weeks of launch (more details here). The updated version is also likely to be announced in the country sometime in 2022.