From Harley-Davidson to Bajaj Pulsar: Neeraj Chopra's love for bikes 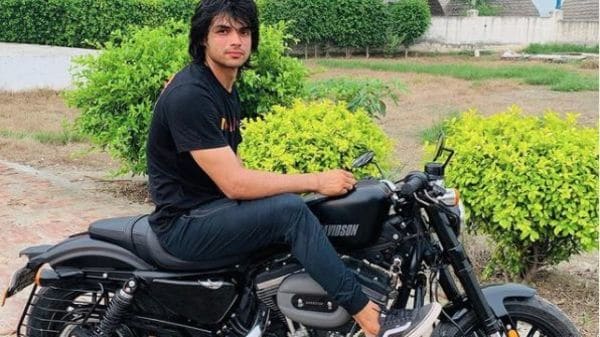 Besides being an ace javelin thrower, Neeraj Chopra is also known as a keen biker. (Image: Instagram/Neeraj Chopra)

Besides being an ace javelin thrower, Neeraj Chopra is also known as a keen biker. Amidst his busy schedule of practice, the Olympian takes out time for his other passion, motorcycling. The athlete from Khandra of Haryana's Panipat district even has multiple motorcycles in his garage.

Neeraj Chopra's enthusiasm for motorcycles is evident from his Instagram account. The athlete has posted multiple images with his motorcycles. One of his prized possessions is a Harley Davidson 1200 Roadster. He bought this Harley back in 2019 right after winning a medal in Asian Games that year.

The other motorcycle he flaunted is more common, a Bajaj Pulsar 200F. This is a particular motorcycle that many bikers have been very fond of.

Interestingly, not only motorcycles, but Chopra has a love for machines on four wheels. He also owns a tractor that he bought in 2019 only and all his vehicles remain tucked in his family home in Khandra.

Chopra's garage will soon have to make space for a Mahindra XUV700. Mahindra Group Chairman Anand Mahindra who is known for his own way of praising successful athletes has announced that the automaker will be gifting the upcoming Mahindra flagship car to Neeraj Chopra for his monumental success in Tokyo Olympics.