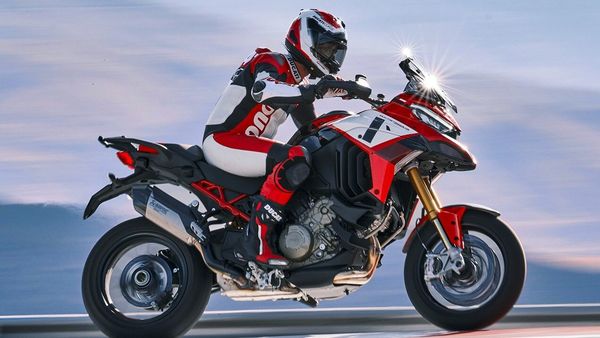 Ducati has taken the covers off the new Multistrada V4 Pikes Peak motorcycle, its sportiest Multistrada model ever.

The design emphasises two elements - the new 17-inch front wheel and the single-sided swing arm. The racing soul of the motorcycle is enhanced by the special Pikes Peak graphics. To enhance the sporty character of the new Multistrada V4 Pikes Peak, there is a heavy dose of carbon fibre elements besides the Akrapovic silencer made of titanium and carbon.

The chassis of the Multistrada V4 has indeed been significantly redesigned. It was developed around the 17-inch front wheel. The bike is equipped with sports road tires measuring 120/70 for front wheels and 190/55 for the rear one. It gets Marchesini forged aluminum rims, which are 2.7 kg lighter than their counterparts on the V4 S.

Ducati has also reduced the overall weight of the bike by 4 kgs compared to the Multistrada V4 S. The Ohlins Smart EC 2.0 suspension guarantees performance even with a sporty driving style through the use of an "Event Based" mode.

Ducati claims the braking system of the new V4 Pikes Peak is the best in its segment. It is derived directly from that of the Panigale V4. At the front, the system consists of discs with a diameter of 330 mm and Brembo Stylema monobloc brake calipers, while at the rear the system has a single disc with a diameter of 265 mm and a Brembo floating caliper.

The new Multistrada V4 Pikes Peak is also characterised by its special ergonomics, which was specially developed for maximum control and optimal lean angles.

The new Ducati Multistrada V4 Pikes Peak is powered by V4 Granturismo, which produces 170 hp and a maximum torque of 125 Nm at 8,750 rpm. This engine, specially developed by Ducati for the Multistrada V4 family, offers power and torque found only in segments above.

The Multistrada V4 Pikes Peak also gets the latest generation of the electronics package of the Multistrada V4 S, which includes the standard radar technology both front and rear, which offers the functions Adaptive Cruise Control (ACC) and Blind Spot Detection (BSD). The 6.5-inch TFT dashboard allows the navigation map to be displayed thanks to the Ducati Connect system that allows the driver's smartphone to be mirrored.