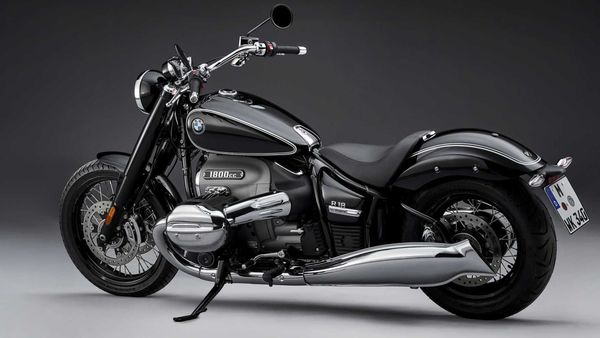 BMW Motorrad revealed the R 18 cruiser internationally on April 3. While some publications are reporting that the bike will arrive in India by late-2020, there is no official update regarding the same.

The production-spec BMW R 18 cruiser isn't a far cry from the concept bike which was revealed to the world last year. While the exterior design and styling is as unique as it gets, it's the massive 1,802 cc air-and-oil-cooled engine which has got everyone talking.

This engine has been rated to produce 91 PS of maximum power at 4,750 rpm, which is backed up by 158 Nm of torque at 3,000 rpm. Another highlight which really sets the R 18 apart from everything else is its exposed shaft drive, which takes inspiration from the old-school BMW cruisers.

The bike uses a number of modern features such as three riding modes - Rain, Rock and Roll, switchable automatic stability control (ASC) and engine drag torque control, or MSR which prevents the rear-wheel slip under aggressive downshifts and hard acceleration. Moreover the company is also offering features like hill-start assist, heated grips, cornering lights and a reverse gear as a part of the rider assist aids. The reverse gear feature will certainly come in handy since the bike tips the scales at 345 kg, it will use an electric motor to assist the reversals.

The company is offering a host of customisation options such as custom-made seats, exhausts, side panels, and the handlebar, allowing the rider to choose what suits the best as per one's own taste. While the bike comes with spoke wheels as standard, the company also allows an option to choose alloys as a part of its personal customisation kit. The bike will be made available in two trims - First Edition and Standard, which may of course vary depending up on the market.

The BMW R 18 is quite a unique offering and doesn't directly competes with anything else in the market. When launched in India, expect it to retail in the price bracket of ₹17 lakh to ₹19 lakh.