In China, it will be sold as a Qianjiang product, while for the outside market Benelli's logo will be stamped on the bike.It won't be a surprise if it lands on Indian soil in 2022 seeing the growing demand for premium bikes in the country.
By : HT Auto Desk
| Updated on: 20 May 2021, 08:53 PM 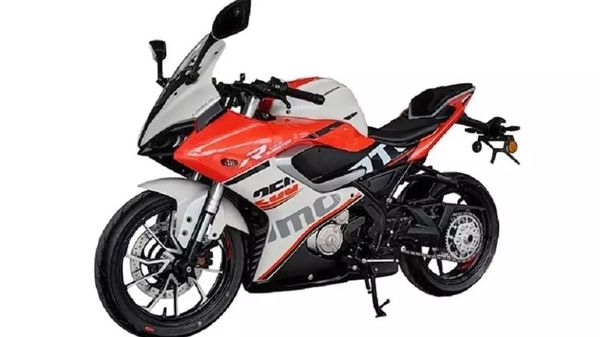 The name for Benelli's 250 cc sportbike is yet to be revealed.

Qianjiang, Benelli's parent company has been working on a range of new two-wheelers for 2021. The company has previously unveiled a number of middleweight motorcycles some of which will take the form of Benelli bikes for the markets outside China.

Now Qianjiang has also recently gotten approval for some more upcoming motorcycle body types in China. Interestingly, there is also a quarter-liter fully-faired sportsbike on the list. In addition to that, model pictures and specifications of this bike have also been leaked on the internet.

The leaked image (above) suggests that the bike features a fully-faired aggressive styling. From the looks of it, segment rivals such as the KTM RC390 and the TVS Apache RR310 might feel the heat from this bike thanks to its sleek yet aggressive and sharp aesthetics. Though some might also find a reflection of BMW S1000RR's twin-beam headlamps in this bike.

Though its official name isn't confirmed yet, the spy image suggests that it will come with features such as a dual headlamp setup residing under an angular fairing, clip-on handlebars, split-type seats, and raised rear-set footpegs to give it an aggressive stance.

There will be a 249 cc liquid-cooled engine reported to produce around 27bhp of maximum power. The transmission option will be a six-speed unit. The bike weighs just 159 kg (kerb) which makes it one of the lightest bikes in its class.

In China, it will be sold as a Qianjiang product, while for the outside market Benelli's logo will be stamped on the bike. It won't be a surprise if it lands on Indian soil in 2022 seeing the growing demand for premium bikes in the country.