Benelli TRK 251 will rival the likes of Royal Enfield Himalayan. TRK 251 by Benelli will serve as the gateway to the company's popular adventure series TRK motorcycles.
By : HT Auto Desk
| Updated on: 16 Dec 2021, 12:57 PM 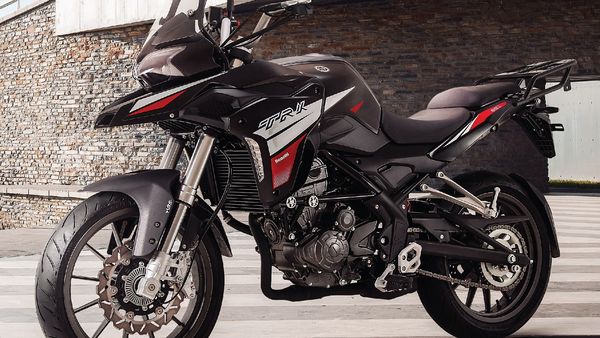 Benelli TRK 251 will rival the likes of Royal Enfield Himalayan.

Benelli India on Thursday announced the launch of its new entry-level adventure motorcycle TRK 251 at a starting price of ₹2.51 lakh (ex-showroom, Delhi). The new TRK 251 will serve as the gateway to the company's popular adventure series ‘TRK’ motorcycles.

Benelli India has already commenced bookings for the new TRK 251, while deliveries are also bound to commence soon.

The new TRK 251 sources power from the same powertrain found on the quarter-litre neo-retro offering, Leoncino 250. It is a 250cc, four-stroke, single-cylinder engine. The engine has been rated to churn out 25.8 PS of peak power at 9250 rpm and 21.1 Nm of peak torque at 8000 rpm. The engine comes paired to a 6-speed transmission.

One of the key highlights of the new TRK 251 is its massive 18-litre fuel tank which as per the company has been added to complement its touring credentials. Also, it gets a decent 170mm of ground clearance. The suspension duties on the motorcycle are performed by a front upside-down telescopic fork, backed up with a telescopic coil spring oil damped for the rear end.

Commenting on the launch, Vikas Jhabakh, MD, Benelli India said, “We are excited to launch our Young Adventure Machine in India today. The TRK 251 is an accessible and high-performance adventure tourer offering purposeful design, aggressive styling, ultra-comfortable ergonomics and engaging performance. With the launch of TRK 251, we are looking forward to add more customers to the Benelli family in the country who are dreaming to enter the adventure touring realm. The TRK 251 is their Entry To Adventure."

The new motorcycle has been made available in three colour options - Glossy White, Glossy Black and Glossy Grey.

The new TRK 251 by Benelli will be a direct rival to the likes of the Royal Enfield Himalayan motorcycle.