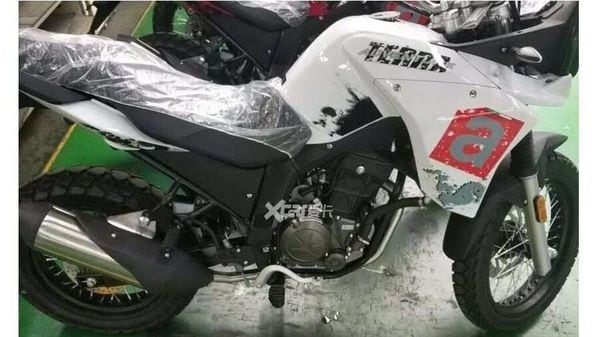 The iconic Italian bike maker, Aprilia is planning on introducing another motorcycle in its Terra range of ADVs. As per a recent spy image surfacing the internet these days, there may be a Terra 250 adventure bike in the works.

For the uninitiated, Aprilia produces and sells its Terra series of bikes in the Chinese market with Zongshen.

As per the source report, the motorcycle was spotted inside a factory in China. It is powered by a 249 cc engine, this unit has been borrowed from the Aprilia GPR 250 sportbike. This is a single-cylinder, liquid-cooled engine which is known to develop 26.5 PS and 22 Nm of torque. What remains to be seen is if the engine inside the Terra 250 would be given a different state of tuning to fit the bike's adventure character, or not.

Presently, the Aprilia Terra series comprises a 125 cc model and a 150 cc model. Both the bikes are featured in two variants – Standard and Adventure. While the standard variant gets 18-inch front wheel, the 'Adventure', as the name suggests, uses a more off-road biased 21-inch front wheel set-up. Similarly, the Terra 250 could also be featured in similar variants.

As per the spy image, it would be kitted with spoke wheels, knobby off-road focused tyres, single-seat, a front telescopic fork, a rear monoshock, and disc brakes at both the ends. Its exhaust system has been conventionally placed instead of the side-mounted high-raised assembly seen on the smaller Terra 150 bike.

There is no confirmation if the bike is considered for any other market outside China yet. But it would be quite an interesting package for India since our market is slowly progressing towards entry-level adventure bikes. Lately KTM has also launched its 390 Adventure, and even Royal Enfield has the Himalayan which is quite an established product in its segment. Moreover, even Kawasaki retails the Versys X-300 in India.