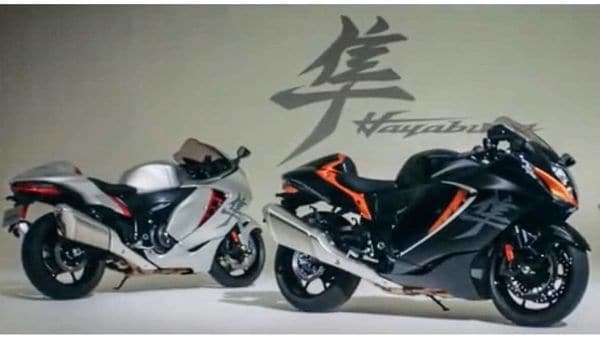 The new Hayabusa will be revealed globally on February 5th.

The Suzuki Hayabusa is about to get a major update for 2021. While the official global debut is scheduled for February 5th, a studio image of the new Hayabusa has leaked just days ahead of the official debut.

The image (above) shows the updated Busa in new angles, revealing significant details about the updated motorcycle.

Even with the latest revamp, the Busa carries over its familiar silhouette though sharper elements are now more prominent. While the updated model clearly retains the overall size and girth which is a signature of the sport-touring model, the new 2021 Busa gets a fairly modern body design. The previously found curvaceous design elements have been replaced by sharper-looking bits. The dual-exhaust arrangement has also been carried over, albeit in a new and sharper design.

Suzuki has also teased the updated instrument console (above video) on the new bike which will also be used to display a greater set of informatics against the previous model. In addition to that, the bike will also feature more electronics and rider aid features such as a bi-directional quickshifter, traction control, wheelie control, cornering ABS, and 6-axis IMU.

Some reports also suggest that there will also be a displacement jump in the new Hayabusa. The previously found 1,340 cc engine will now be replaced by a bigger 1,450 cc engine. Goes without saying, the engine will also grow more powerful with the new update.

While there are no official updates on its arrival in the Indian market but expect it to land on Indian soil anytime in the second half of the year 2021.