The 2021 Ducati Multistrada V4 will be a completely new motorcycle from the ground up.Deliveries of the new Multistrada V4 in India will begin shortly after the price announcement.
By : HT Auto Desk
| Updated on: 22 Jul 2021, 01:21 PM 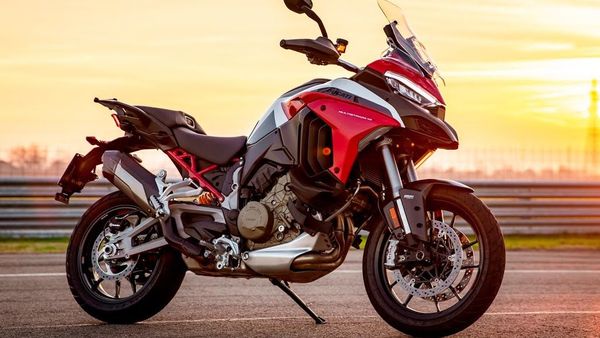 Ducati India has hinted that the Multistrada V4 will be made available in India only in limited numbers.

The pre-launch bookings for the motorcycle have already commenced and interested customers can get the upcoming ADV reserved at a token amount of ₹1 lakh. The company has also hinted that the motorcycle will be made available in India only in limited numbers.

(Also Read: At less than ₹40,000, this is the most affordable Ducati electric two-wheeler)

The customer deliveries of the new motorcycle will begin shortly after the price announcement, Ducati India has previously said. Also, customer test rides will begin soon.

The Multistrada V4 will be an all-new motorcycle from the ground up. It will stand at Ducati India's flagship adventure motorcycle. “Since the global announcement, there has been unprecedented excitement for the Multistrada V4. It features the best of Ducati’s technology, with the world’s first front and rear radar assistance, advanced digital dashboard, blind spot detection and more," Bipul Chandra, Managing Director of Ducati India has said previously announcing the pre-launch bookings of the bike.

One of the key highlights of the new Multistrada V4 includes its next-gen Ducati Connect mirroring system. It will source power from Ducati's new V4 Granturismo engine shared with its other new-gen models such as Streetfighter V4 and Panigale V4.

Details on its variants, standard equipment will be rolled out tomorrow.

The new Multistrada V4 is likely to be priced in the range of ₹18 lakh to ₹22 lakh (ex-showroom).

Meanwhile, Ducati has announced that it has managed to record 43% worldwide sales growth in the first half of 2021, and the Multistrada V4 has contributed largely to the sales. (More details here)