Triumph Trident 660 holds a special spot in the middleweight segment majorly because of its placement which makes it slightly costlier than Kawasaki Z650 but much cheaper than the Honda CB650R.
By : Prashant Singh
| Updated on: 11 Mar 2022, 18:47 PM

Three words - Exciting Middleweight Roadster, this is what Triumph had in mind when designing the Trident.

Trident, a weapon borne by several mythical warriors, has a completely different significance in the motorcycling world now. Triumph Motorcycles gave this name to its ‘most affordable’ motorcycle in the range which is also available for purchase in India. For a long time, models from the Bonneville series were considered entry-level from Triumph but the rules of the game changed with the launch of the Trident 660 in 2021. Though the most affordable, Trident is still far above to be called an entry-level for any brand. Read on to know why I think so.

Three words - “exciting middleweight roadster", this is what Triumph had in mind when designing the Trident. Well, some of you will say that the company already had the Street Triple range if such was the case. So what made the company invest resources in a completely different product? The answer is simple- affordability! 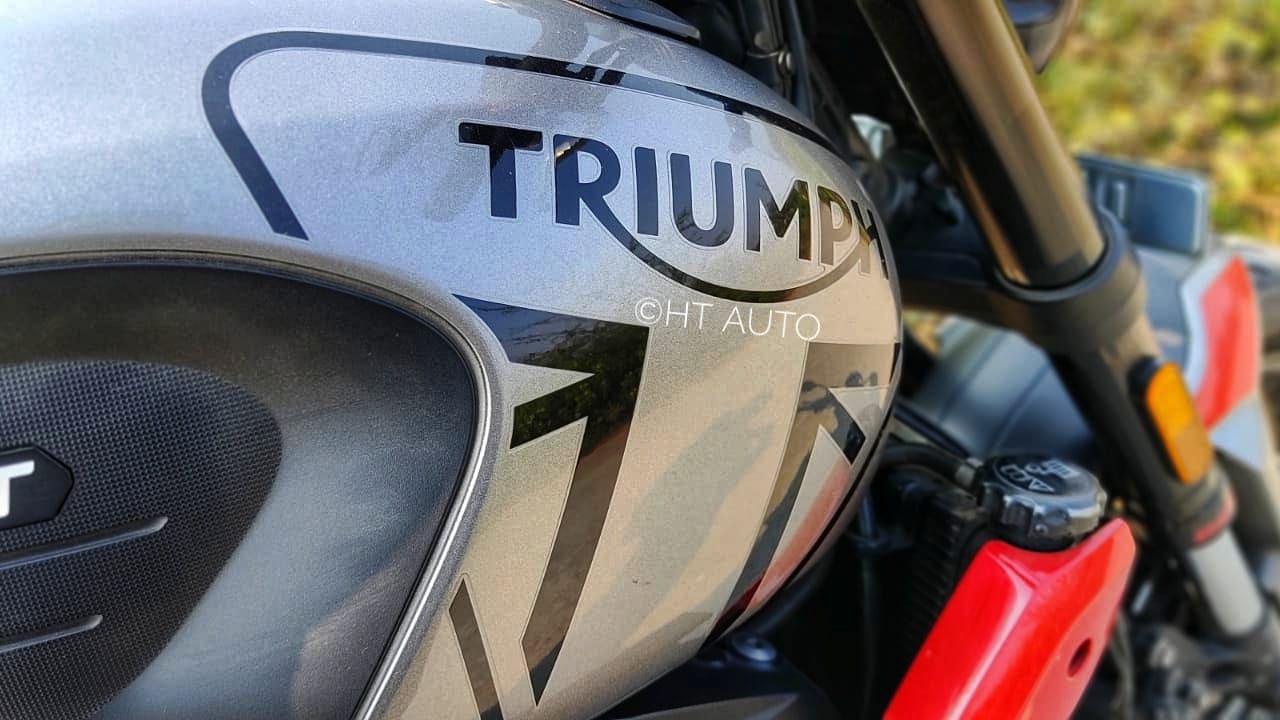 Trident 660 features an impeccable paint quality which gives it a premium look.

Trident sports a pretty laid-back design. Unlike the Speed Triple, it is not staring back at you with the twin bug-eyed design but rather a simple, circular head that qualifies to be called retro. The body panels have a neat touch, and the paint finish is top-notch. The test unit wasn't exactly new and had also clocked significant figures on the meter, but still, the quality of the paint felt like new. Also, the use of dual-tone highlights on the front fender, radiator guard as well as under the rear subframe, contribute to an overall likable touch. And to add to that, the fit and finish on the bike didn't really feel entry-level by any standard.

Like the front headlamp, the entire lighting on the bike is LED. Blinkers are slim and positioned adjacent to the head up front, while the rear sits on the low-mounted mudguard that has a scrambler vibe to it. Thanks to the tail tidy, the rear section also looks neat.

Trident also comes forward with an all-digital TFT display that has been designed to look retro. A single circular pod with an rpm meter over the top, mixed with a small lower placed individual display. Not a fan of this layout. 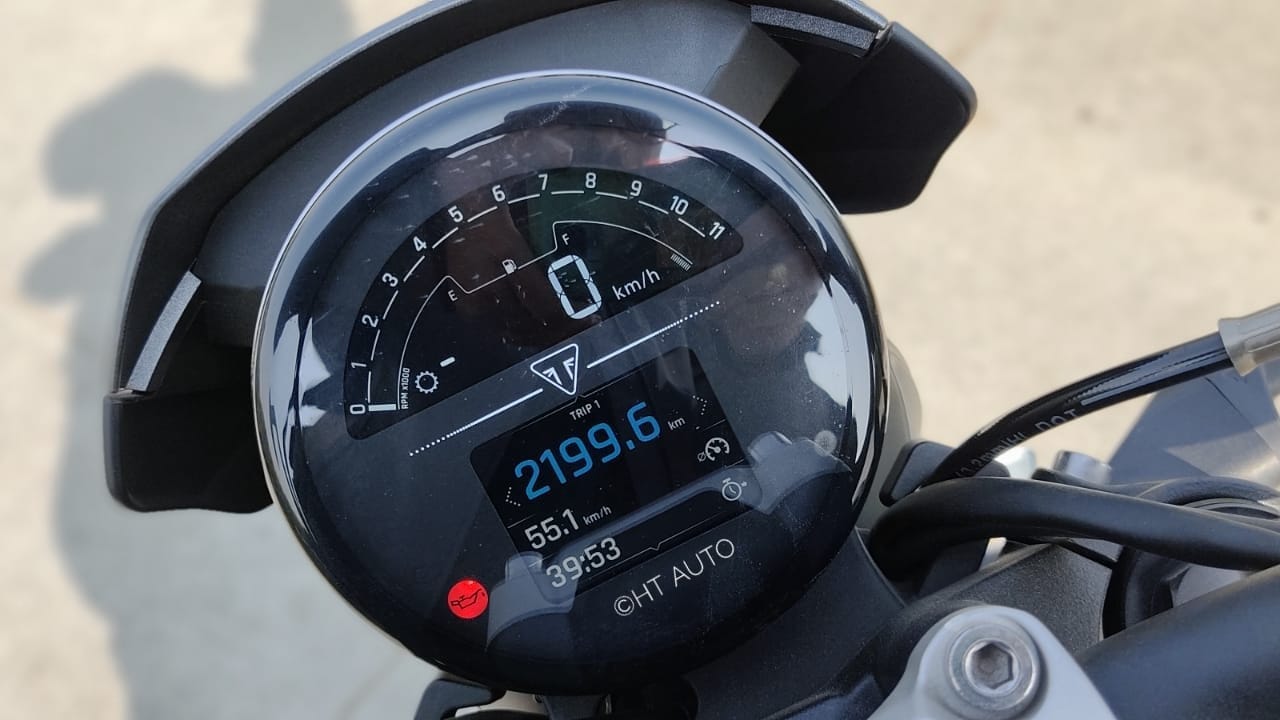 Trident also comes forward with an all-digital TFT display that has been designed to look retro.

The Trident packs a new 660 cc triple engine which a derived from the resized and returned version of the much-popular Street Triple 675 which began life in 2007. In the new avatar, the engine uses the same 74mm bore as the old 675, however, swings its pistons through 51.1mm strokes and not 52.3mm ones.

The company claims that there are a total of 67 new engine components on this unit including a new crankshaft, alternator, camshaft, cylinder head, cylinder liners, throttle bodies, and airbox, along with an exhaust, header, and silencer. At 81 PS/64 PS it also ticks all the boxes from a middleweight performance point. The UK-based two-wheeler maker says that the engine manages to push out more bottom-end torque than the Street Triple S, with 90% of its torque available from as low as 3,600 rpm. And I can't disagree. Even though I don't have a dyno at my disposal to put these technical claims to test, I did what I could do best.

Crack the throttle wide open, and let the torque punch right in the face. I wasn't expecting this, ill be honest. There's tons of torque in the low-end, exactly where a good city bike would need it. It also has the right kind of power to blast out of corners and stop, and then start again. Something that novice riders would appreciate especially when taking some torque sessions in and around the city roads. There is a 6-speed transmission on the Trident which is clunky when going fast. The shifts are downright precise and old-fashioned without any drama. Something that reminds me of the old Kawasaki 650s.

Though the Trident misses out on a quick shifter, I honestly do not see a point on this bike, unless you are taking it on daily track sessions, but if you are such a track junkie, then you wouldn't buy this in the first place. Trident 660 features two riding modes - Road and Rain. These can be used with the help of several buttons placed on the left side of the handle bar.

Unlike the Street Triple which gets an aluminum perimeter frame, the Trident employs a much simpler and more cost-effective steel tube frame. While the latter has a clear cost advantage here, it also misses out on the agility that's found on the Street Triple. The Trident feels front-heavy and isn't the sharpest handling bike you've put your hands on. Throw it around the corner and it sticks to the lines well, but not exactly by sports bike standards.

Fitted with a non-adjustable 41mm inverted Showa front fork which is backed up with preload-adjustable only Showa shock, mounted in linkage out at the back, the setup works fine for what it is designed to do. For city or highway riding, it is near perfect. It always felt perfectly stable running through serial bumps and it feels comfortable and composed even when roads go bad. The Trident can also cruise comfortably on triple-digit speeds all day long without breaking a sweat which makes it a good bike for longer runs. It also gets switchable traction control, in case it rains a lot in your city and a dual-channel ABS which can't be turned off. Plus, not to forget there are two riding modes Road and Rain for more safety.

Trident feels perfectly normal for the road bike standards, and at 805 mm seat height, it also ticks the right boxes when average Indians are concerned. And to add to that, the saddle on the bike also feels plush enough even for my ever-expanding girth. Although the rear seat, I couldn't test due to time constraints. But by the looks of it, this shouldn't be an exception. Trident feels perfectly normal for the road bike standards, and at 805 mm seat height, it also ticks the right boxes when average Indians are concerned.

Trident 660 could be your first big bike if you want to upgrade to a higher-capacity motorcycle that is capable enough to serve as a stepping stone for the liter-class segment. In the process, it will also be quite a comfortable daily bike which you can also use for touring if required. It holds a special spot in the middleweight segment majorly because of its placement which makes it slightly costlier than Kawasaki Z650 but much cheaper than the Honda CB650R. Only recently Triumph upped its pricing to ₹7.45 lakh (ex-showroom, Delhi) from the original ₹6.95 lakh (ex-showroom, Delhi). It still makes sense at this price, but anything above it may be too much to pay.