Germany's auto stimulus package has incentives galore for EVs priced below 40,000 euros.The most affordable Tesla car in Germany is Model 3 priced at 43,990 euros. If the move to cut prices in China and the reason behind it is anything to go by, Tesla could consider a price slash in Germany too.
By : HT Auto Desk
| Written By : Shubhodeep Chakravarty
| Updated on: 04 Jun 2020, 04:42 PM 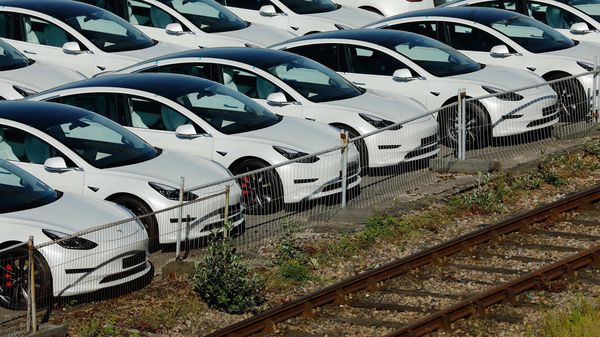 New electric automobiles, manufactured by Tesla Inc., sit on the dockside after being imported to the Port of Southampton in Southampton, U.K., on Thursday, May 14, 2020. Tesla asserts that restarting its operations in the midst of the coronavirus pandemic doesnt make the company an outlier, nor is it going against the grain. Photographer: Luke MacGregor/Bloomberg

In recent weeks, Tesla slashed prices of its extremely popular electric vehicles substantially in several countries where it has a presence. With a clear aim of boosting sales at a time when the global automotive industry wades through troubled waters, the California-based company is determined to not just maintain its lead in the electric cars' segment but extend it. And fueling this drive in many countries are governmental decisions to subsidize electric vehicles. As such, Germany could be the next market where Tesla reduces product prices.

While Tesla has so far made no move in Germany which hints at a discount in the offing, the country's recent auto stimulus has triggered murmurs of whether Tesla CEO would consider such a move. Bloomberg reported on Thursday that Germany's 130 billion euro ($145.74 billion) stimulus package has several incentives for cheap electric and hybrid vehicles. The catch however is that the 6,000 euro incentive for battery electric cars is only valid for those that cost 40,000 euros or less.

Who gains and who doesn't from Germany's auto stimulus package.

Tesla's Model 3 retails starting at 43,990 euros in Germany. A price cut to take this figure below 40,000 could make Model 3 - the most successful car in the company's portfolio, eligible for the 6,000 euro incentive. If a manufacturer stipend is included, electric cars could get incentives to the tune of 9,000 euros.

It could well be a tempting move for Tesla to slash prices. After all, the company did make a similar move in China recently when it cut prices of Model 3 car by 10% in a bid to ensure it remains eligible for the revised EV subsidy here. China had decided to continue with its subsidies for EVs but for only those that cost less than 300,000 yuan. The Model 3 base variant was priced at 323,800 yuan but the cut took this figure down to 271,550 yuan and therefore further made it eligible for the subsidy. (Read full report here)

While China is the largest EV market in the world and it won't be fair to compare it with European countries, Germany is also right up there in list of countries with highest sales of EVs.

And it is not as if Tesla has not taken that path in Germany before. In March, the company had brought down the prices of Model S by a few thousand euros. This was then expanded to several other European markets as well. By late May, price cuts crossed the Atlantic and the company announced pricing cuts of up to $5,000 on Model S, Model 3 and Model X vehicles in the United States.

But while the Chinese auto market appears to have begun the recovery process and sales are gradually stabilising - giving Tesla and other auto manufacturers hope, the same is not yet true in the US and Europe. Car sales, for instance, fell by a drastic 90% in the UK in May .

Then there is the angst of Tesla customers, some of whom have voiced their frustration of having bought expensive Tesla models recently, only to know that the company slashes prices. Many in China, for instance, claim they were vigorously coerced into hastening their decision of buying a Tesla by showroom managers because they knew a price cut was in the offing. (Read full report here)

Whether such price cuts from Tesla extend to more and more markets remains to be seen. For now, Tesla appears comfortably positioned to charge forward despite hurdles galore staring at the industry at large.