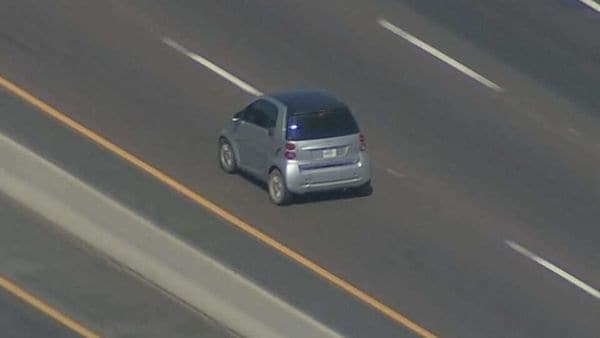 Quarantine life is not devoid of entertainment even during the lockdown period amid coronavirus. People were in for one such moment on Wednesday that involved a Nano-sized car.

Imagine this: A two-door smart car that can produce maximum power of 89 horsepower and hit a top speed of 96 mph (154 kmph) taking on police cars on a highway with choppers above to keep an eye in a so-called ‘high-speed’ chase.

One may think it is a stupid idea. But the driver of the smart car did not. In fact he tried his best to outrun the police in a this highway chase. Only that the police actually gave up in this oddly disproportionate chase after a while.

It all started at a parking lot in Arizona, US. The driver was reported for creating a ruckus when the police tried to intervene. The driver refused to cooperate and decided to drive off in his Smart Fortwo. Initially, the police tried to stop him and get him to pull over. But the person continued his run, even jumping some of the red lights on the way, according to police.

The driver continued his 'free-run' for a while with a chopper watching it all the way. However, several other cars could be seen overtaking the smart car along the way.

The smart car was later found on the same highway some time later and the driver was taken into custody.

The Smart ForTwo electric cars were introduced in the US in 2019 by Daimler. Earlier the company used to sell the combustion versions of the smart car. It was discontinued two years ago.