Watch how Android Auto will work on BMW cars

The video demonstration inside a G30 530e xDrive shows one needs to pair the device with the car only once and it will be good to go every time a person gets in for a drive.
By : Sabyasachi Dasgupta
| Updated on: 26 Jun 2020, 04:33 PM 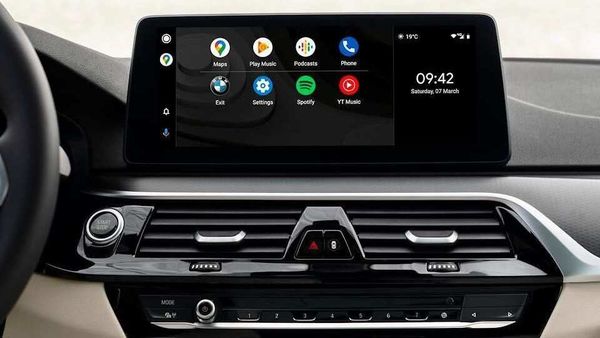 With Android Auto, the display will be split with the primary app or app drawer being placed to the left, while on the right the clock or a small media window will be displayed if one chooses to play music.

BMW infotainment systems have always supported iOS and its Apple CarPlay. In fact, BMW was the first to integrate iPod in their vehicles, first to offer wireless CarPlay. But things will change soon. Last year the German carmaker had announced the arrival of support for the Google operating system. And the moment seems to have finally arrived.

BMW has shared a video on its YouTube page in which it has shown for the first time the functionality of the integration between Android Auto (wirelessly) and the BMW 7.0 operating system.

The video shows an overview of the functionality of this new integration. To use Android Auto on BMW cars, one simply needs to pair the device with the car and everything will be available every time the person gets into the car, without having to connect the phone every time. All the apps running on Android Auto will be displayed on the infotainment screen and one can interact with them via Google Assistant, touching the screen or using the iDrive controller.

Android Auto will also be integrated into the BMW's Live Cockpit. This means that information (such as navigation instructions) will not only be displayed on the central screen, but also in the instrument panel and, if available, in the head-up display. This would help the driver of the BMW car to keep eyes on the road all the time.

With Android Auto, the display will be split with the primary app or app drawer being placed to the left, while on the right the clock or a small media window will be displayed if one chooses to play music.

Android Auto Wireless will be available in BMW cars with the 7.0 operating system , which already support  Apple CarPlay Wireless . The new availability will be available via an over-the-air software update , although BMW has not yet announced the official date of arrival of the update.

This is the first time the German carmaker is integrating a Google-based app with its vehicles. Earlier this month, BMW became the first carmaker to enable its customers to use Apple's iPhone as a fully digital car key. It is also the first to introduce support for BMW Digital Key stored securely in Apple Wallet for iPhone.