This company claims its EVs can be shipped like washing machines

The Oregon-based EV maker has struck a deal with DHL to deliver its electric vehicles across the US.The Founder of the company says that customers will also get a tracking number on their vehicles.
By :
| Updated on: 26 Oct 2020, 06:14 PM 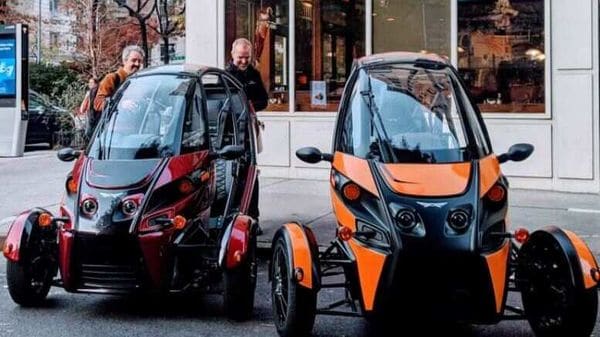 Arcimoto Inc. spent more than a decade building a futuristic electric vehicle that it says can entirely transform transportation; now, it’s engineered a way to get it into driveways.

The Oregon-based manufacturer has struck a deal with Deutsche Post AG—better known as DHL—to deliver its machines across the US, a logistical coup that could spark demand outside of its Northwest base. The company has collected $100 “pre-order" deposits from 4,400 would-be customers, yet about two-thirds of those people live outside of California, Oregon and Washington, the states where Arcimoto currently is delivering its machine.

“Elon [Musk] said he went from production hell to delivery hell," founder and CEO Mark Frohnmayer said of the Tesla chief executive officer. “This is taking that delivery hell and solving it for us in one shot. We don’t want to be in the trucking game."

Standard DHL trucks will pull up to Arcimoto’s factory in Eugene, Oregon and bolt onto their beds six Arcimoto machines. The open-aired pods, which look like a cross between a Kia Soul and a grasshopper, start at $17,900. The trucks then will travel to DHL distribution centers where the buggies will be transferred onto flat-bed tow trucks for last-mile delivery.

“People will actually get a tracking number on their vehicle," Frohnmayer, an engineer who made his fortune in video games, said. Customers will pay about $1,000 for the service, depending on where they are in the country—that’s up to one-third cheaper than the cost of private transportation from the country’s network of freelance car haulers.

The arrangement will allow Arcimoto to make an end-run around state laws that prohibit vehicle sales without a formal, third-party dealership, according to Frohnmayer. The company is committed to selling directly to consumers, like Tesla, which has fought such regulations for years in Michigan, Texas and other states.

“Our customers are out there selling the product every day—not necessarily on purpose," Frohnmayer said. “Wherever they go, they are absolutely bombarded with questions."

Less than 200 of the machines are currently on roads. The company is only producing roughly two a day. Arcimoto has hired a consultancy to streamline its supply chain and assembly line. It hopes to be able to churn out 137 machines a day by the end of 2022.

Even at the current pace, investors seem patient. Arcimoto shares have surged nearly six-fold since a nadir in March, as the product struck a chord with commuters wary of mass transit and Lyft. As Covid-19 raged, Arcimoto also reconfigured its vehicle to handle groceries, takeout and Amazon packages. That iteration is dubbed the Deliverator—now it too can be delivered.