The Batman movie: New Batmobile emerges as a retro muscle car in trailer

Director Matt Reeves has not revealed any details yet on which model was picked as the latest Batmobile. However, Lego's scale model, a replica of Batman's new ride, is said to be inspired by Dodge Challenger, Ford Mustang and Chevrolet Camaro.
By : HT Auto Desk
| Updated on: 18 Oct 2021, 01:57 PM 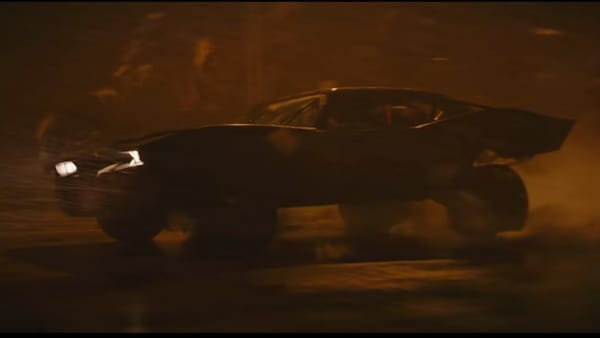 A look at the new Batmobile in action from The Batman movie trailer. (Photo courtesy: Warner Bros. Pictures on YouTube)

The Batman movie’s latest trailer has given enough sneak peek into the new Batmobile patrolling Gotham City in the latest from Warner Bros. Pictures. It appeared in a chase sequence, leaping through balls of fire, and give us a hint of what the design of the Batman’s new ride will look like.

The new Batmobile does not appear as a car from the future. Instead, it is reminiscent of the Batman’s ride in the 1980s. It is essentially a muscle car modified which comes with a rocket booster at the rear.

The car used for the latest Batmobile seems to be inspired from Chevrolet Camaro, but is much longer in length. It appears to have certain similarities with Ford Mustang and Dodge Challenger too.

The Batmobile, being driven by Batman starring Robert Pattinson, has a tank-like appearance with heavy modifications. It is not even closer to the sleeker models used by the franchise when Christian Bale or Ben Affleck donned the Batman cape.

Director Matt Reeves has not revealed any details yet on which model was picked as the latest Batmobile. However, plastic toymaker Lego has come up with a scale model of the Batmobile inspired by Pattinson's latest. It also provides some spoilers on the car.

The new Batmobile has attracted a lot of attention on social media. The trailer of the movie has already garnered more than one crore views. However, Batman or Batmobile fans are split in their opinions about the new car. While some think it is one of the bests they have seen from the franchise, others expected an improved model from the ones used in the past.

Matt Reeves's upcoming The Batman starring Robert Pattinson is going to release on March 4 next year. The movie also stars Colin Farrell as The Penguin, Paul Dano as the Riddler and Zoe Kravitz as the Catwoman.