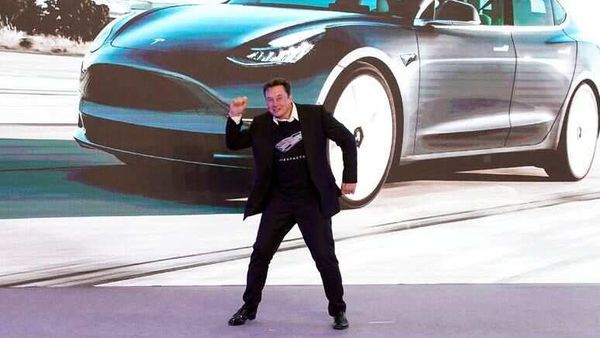 File photo - Elon Musk is dancing his way to the bank as Tesla continues to scale new heights.

Now he’s at most a couple of months away from securing the third, according to the company’s own estimates, lining him up for yet another multibillion-dollar payout.

Barring a prolonged drop in share price, the company’s average trailing market capitalization over six months is poised to exceed $200 billion sometime in the third quarter, the electric-car maker said Tuesday in a filing. That will unlock 1.69 million stock options for Musk, worth roughly $2 billion.

Another performance criteria triggering the payout -- $3 billion in adjusted earnings before interest, taxes, depreciation and amortization, accumulated over four consecutive quarters -- has already been met, according to the filing.

Tesla’s shares have more than tripled this year, making it the world’s most valuable automaker despite producing only a fraction of the vehicles that its rivals churn out. Last week, the company posted a fourth-straight quarterly profit, possibly paving the way for it to join the S&P 500 Index.

Musk’s compensation package -- the largest corporate pay deal ever struck between a CEO and a board of directors -- includes 20.3 million options, split into 12 tranches, that could yield the founder more than $50 billion if all goals are met, according to Tesla’s estimates.

Musk, 49, is already among the world’s richest people with a $72.3 billion fortune, according to the Bloomberg Billionaires Index.