In one of the photos shared by the diplomat, Elon Musk can be seen demonstrating the Tesla Model S Plaid's Autopilot system with his hands off the steering wheel.
By : HT Auto Desk
| Updated on: 07 Mar 2022, 11:51 AM 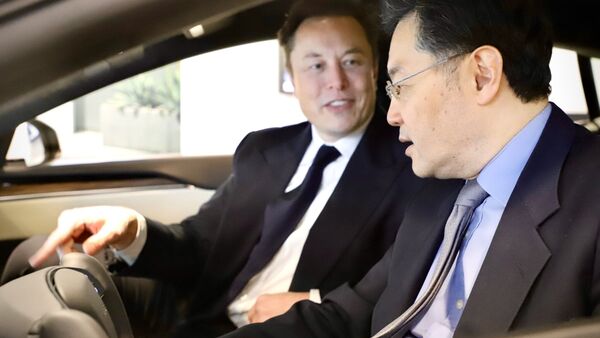 Tesla CEO Elon Musk (L) and China’s ambassador in the US, Qin Gang (R) taking a ride in the Tesla Model S Plaid.

In one of the photos shared by the diplomat, Musk can be seen demonstrating the car’s Autopilot system with his hands off the steering wheel and his feet seemingly away from the pedals. But it’s unclear if the Model S Plaid has Tesla’s ‘Full-Self Driving’ beta software. The yoke steering wheel of the vehicle was also visible in one of the images.

(Also read | Tesla in league of one as oil prices touch new highs. Here's why)

In another post, Gang mentioned that he had an “inspiring talk" with Musk “on cars on the road, stars in the sky, research of human brain, meaning of life on earth and our future into the space." "Look up and think beyond," he wrote.

Tesla has made a strong entry into China and the country has become an increasingly important market for the EV maker ever since production at its factory in Shanghai began production in late 2019. The site has the capacity to produce 450,000 units annually with many vehicles being exported to overseas markets. Roughly half of the cars that Tesla sold globally last year were produced at the Shanghai factory.

Globally, the Tesla facility in China's Shanghai is one of the car maker's largest facilities and also serves as a base for not just the Chinese market but products manufactured here are also sent to several European markets. In fact, the EV maker is reportedly planning another factory in the city to more than double its production in the country.