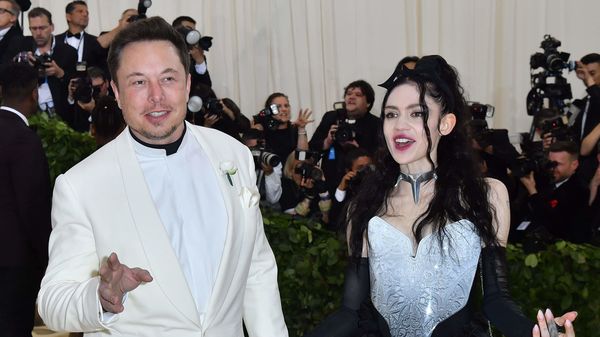 File photo: Elon Musk and Grimes arrive for the 2018 Met Gala, at the Metropolitan Museum of Art in New York.

Musk, the outspoken Tesla chief, announced the birth of the couple's first child earlier this week, before Grimes broke down the unusual moniker.

"X, the unknown variable. Æ, my elven spelling of Ai (love &/or Artificial intelligence). A-12 = precursor to SR-17 (our favorite aircraft)," she wrote on Twitter.

"A" also stands for "Archangel, my favorite song," she added.

Musk, the 48-year-old CEO of SpaceX, gently corrected Grimes on Twitter to say the plane was an SR-71 -- a Cold War spy aircraft.

"I am recovering from surgery and barely alive so may my typos b forgiven," she joked in reply.

Registering the name in their home state of California may create some legal challenges as non-alphabetic characters are not allowed by law.

Musk, who has been dating Grimes since 2018, already had five sons, and has been divorced three times -- twice from the same woman.

Grimes, 32, whose real name is Claire Boucher, announced she was pregnant in January.

The couple made waves with their first public appearance together at the Met Gala in 2018, surprising both the music and business worlds. Grimes wore a choker shaped like the Tesla logo, demonstrating their relationship status.

Musk, known for his vaulting ambition and brash demeanor, made news last week in a Twitter message saying Tesla's stock was overvalued, sending shares of the electric carmaker tumbling.