While LG supplies many automakers, including Hyundai, it’s been particularly fueled by a deal to supply batteries to Tesla’s China factory, which is pumping out Elon Musk’s cars at a growing clip.
By : Bloomberg
| Updated on: 20 Jul 2020, 08:12 AM 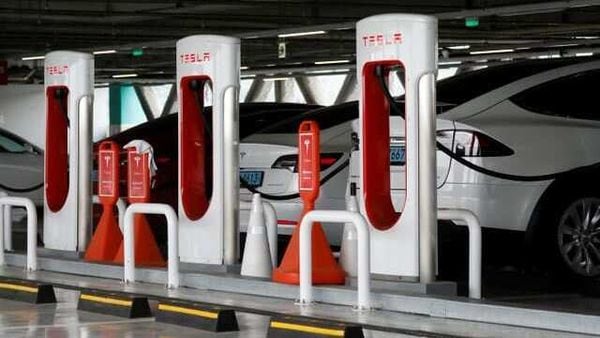 The global frenzy for electric vehicles that has seen Tesla Inc.’s stock surge threefold is now juicing the shares of a South Korean supplier that has become the world’s biggest maker of electric vehicle batteries.

South Korea’s LG Chem Ltd. has surged more than 62% this year to a valuation of around $30 billion, becoming the sixth-largest stock on the benchmark Kospi index and leaving Hyundai Motor Co., the nation’s largest automaker, in the dust.

While LG supplies many automakers, including Hyundai, it’s been particularly fueled by a deal to supply batteries to Tesla’s China factory, which is pumping out Elon Musk’s cars at a growing clip.

“We believe LG Chem is set to benefit the most in Europe with its high market share and positioning," said Jae Lee, chief executive officer at Timefolio Asset Management SG Pvt, a Singapore-based hedge fund that holds shares of the company.

LG Chem had 24% of the global EV battery market as of end-May. China’s Contemporary Amperex Technology Co. Ltd. has been hurt by the pandemic, the trade war and a scaling back of government subsidies in its home market, though it recently forged a supply contract of its own for Tesla’s Shanghai facility.

“LG Chem has the largest capacity for EV batteries in the world now and it’s even increasing it, while rivals are not doing so," said Wooho Rho, an analyst at Meritz Securities Co. Rho and at least six other analysts raised their price targets for LG Chem this month, with Meritz expecting a consolidated operating profit of 532 billion won ($440 million) for the quarter ended June, the most in about two years.

The company’s shares fell as much as 1.9% Monday in Seoul, extending its 2.5% drop last week. Some investors are worried that rising competition among battery makers may put pressure on growth in margins, according to Hyunsoo Kim, an analyst at Hana Financial Investment Co..

Other market concerns include the possibility that Tesla could announce a new battery supplier at its “Battery Day" event on Sept. 22, Meritz’s Rho said, adding that such concerns are probably overblown given the high barriers for any potential new partner.