Slovak makers of flying car press on after crash

Slovak tech firm AeroMobil is working on a new prototype of its flying car, weeks after the vehicle of the future spread its wings and crashed during a test flight.
By : AFP
| Updated on: 08 Jun 2015, 10:33 AM 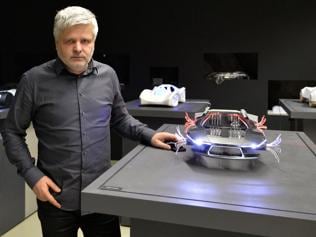 Slovak tech firm AeroMobil is working on a new prototype of its flying car, weeks after the vehicle of the future spread its wings and crashed during a test flight.

'Sometimes you have to push the vehicle to the limit, to see how it behaves,' AeroMobil chief strategy officer Martin Bruncko told AFP about the May 8 incident.

Inventor Stefan Klein was flying the blue-and-white airborne automobile 900 feet (270 metres) off the ground when he was forced to deploy a parachute to slow its descent.

Klein escaped unharmed but the flying car was damaged in what the company called an 'emergency landing'. AeroMobil would not say what prompted the crash.

The company is now back at the drawing board and hopes to see pre-orders in 2017 before delivering its first flying cars to clients in 2018.

It still needs to obtain a green-light from the European Aviation Safety Agency for commercial flying.

Klein said the company has seen interest from countries including Indonesia, Russia and South Africa for the cars that could cost around 500,000 euros ($560,000) or more.

The prototype that crashed will be displayed at the Milan Expo 2015.

The vehicle for two is six metres long so it fits neatly in a parking space or garage and tanks up at any filling station. But once it reaches an airport it can unfold its wings within seconds and become a plane.

'It integrates two utilities in a similar way as a smartphone, which is a good phone and internet browser in one,' said AeroMobil spokesman Stefan Vadocz.

'In the past you needed two separate products.'